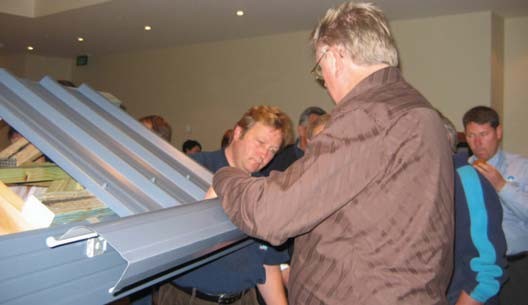 • Built-in overflow system One of the most common problems with leaky homes is the overflow of water from the gutter into the soffit linings and, subsequently, into the house. This new system is the first South Island-made steel system to provide a continuous gap between the gutter and fascia panel so that any overflow of water can be safely drained away. The only other system to do this in New Zealand is the 165mm External Fascia System manufactured by Dimond in Auckland.

This key feature provides peace of mind to home owners and installers alike.

• Ease of replacement First, the 185mm Fascia Panel design allows users to remove and replace the fascia panel without removing any of the roofing. It is a fact that fascia panels rarely last as long as the roofi ng material, and can also be damaged by ladders, removal trucks and other tradesmen.

However, previously when you had to replace the fascia panel you also had to remove some of the roofing. Now that is a thing of the past. The panel can be removed by hand by simply unclipping it without any disruption to the roofing or any other part of the house.

This means signifi cant savings in time and cost when replacing the fascia panel.

• Adjusting gutter fall after building movement Often a major problem is that after a house is built the foundations settle, changing the fall or alignment of the fascia and gutter system. With Dimond’s 185mm system you are able to unclip the gutter from the bottom and, without removing it, adjust and re-fall the gutter.

This removes any stress that may have been placed on the system due to building movement.

• Compliance with the Building Code The 185mm system is the only system which conforms to the section of the building code (AS/NZS 3500.3.2:1998) which clearly states that if the gutter covers the roof line then there has to be a 10mm gap between the fascia panel and gutter to facilitate overflow of water.

The new system is not only functional but looks great as well. Available in Dimond’s Habitats colour range, the fascia and gutter can match or complement the roofi ng, whatever the colour.

The system is a signifi cant step forward in rainwater systems development, creating a new standard for quality and functionality while remaining suitable for most types of roofs.