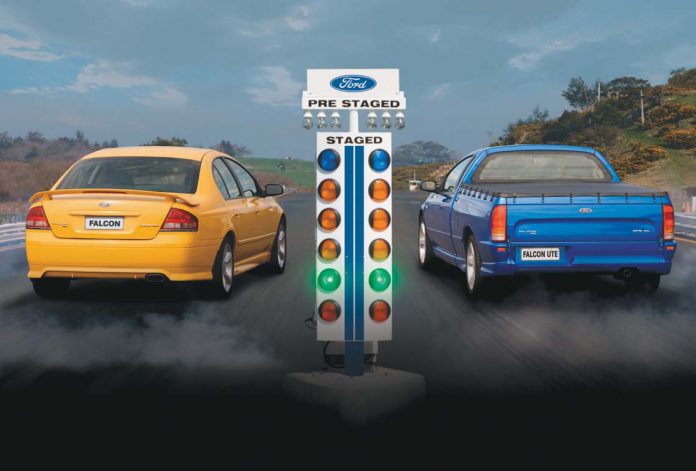 With petrol prices doing the dance of the upwards spiral, there’s no doubt the time of the small car is coming again — which is good news for the planet as a whole, but not such good news for the ever increasing numbers of gorilla-sized homosapiens among us.

We have a lot of large folk in this country, and across the Tassie for that matter, so it’s no wonder big cars like the Ford Falcon have been popular down under for so long. But what do the big car choosers do now with petrol prices going through the roof and bike-riding Greens battering our ears about dwindling resources?

Recently I’ve spent some time helping an oversized friend of mine select a new car, his first after 14 years of trundling round in a big ol’ Ford, but with his super-sized rear and builder-sized front overhang, it hasn’t been easy. Well, we found a solution — to his astonishment my friend was able to fit into a Mondeo.

He bought it, and he loves it! Of course, I’m not saying every large person can do that. I guess it depends to some extent on the individual’s overall shape, but my friend is very large and it worked for him. What’s more, he says, once he’s inside with the door shut, he doesn’t feel he’s in a small car.

For him, that’s a very large plus because he hates small cars with an irrational depth of feeling. As it happens, the Mondeo has been a favourite of mine ever since its New Zealand launch. Driving it on near empty roads from the Chateau back to Auckland early one misty-moisty morning was a joy that has stayed with me, and I have to admit the occasion may have coloured my appreciation for the car just a little.

However, I’m not alone. In August this year the Mondeo was the most popular car in its sales segment and, over the year, holds the number two spot. Now it’s been upgraded. Happily it keeps that “classic sedan” look, but it has somehow gained a rather more sporty appearance too — fiendishly clever, these designers.

What they’ve done is restyle the front and rear bumpers with lower valances, and stuck extra bits of chrome in various strategic places. There are new upper and lower grilles at the front, more clear glass in the large rear lamps and some additional red reflectors on the rear bumpers.

It may not sound like much but, collectively, these extras make a remarkably pleasing difference to what was already a most attractive medium-sized car.

If you’re in the market for a new car, do have a look at the latest Mondeo, and if you’re a bit on the large size (or not) you might, at around $40,000, be pleasantly surprised at the feel, fit, spaciousness and performance of one of these very smart cars.