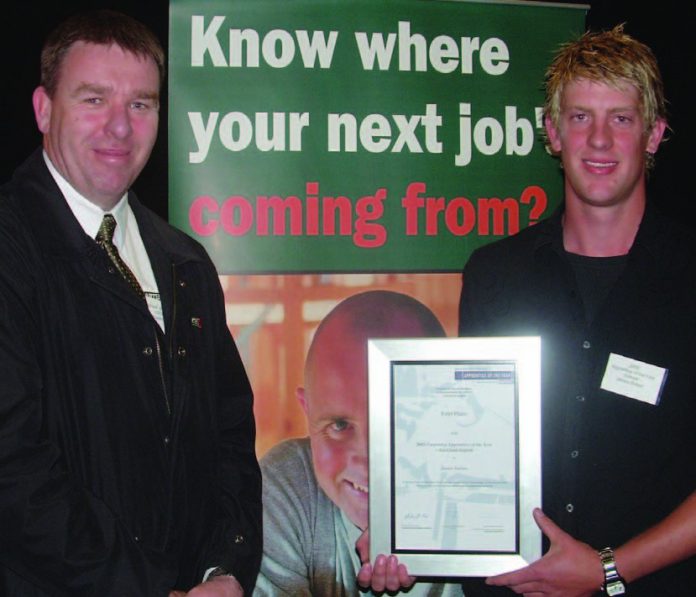 Apprentices from far and wide came together for the recent Registered Master Builders Federation Carters 2005 Apprentice of the Year competition. There were fi ve regional competitions around the country — Auckland/Northland, Waikato, Bay of Plenty, Wellington and Christchurch.

Apprentices are vital for the building industry, and the aim of the competition is to:

• increase awareness of building as a career choice,

• promote excellence in training, and

• recognise and reward the attributes that make a good carpentry apprentice.

The competition was a joint project between sponsors Carters, the Building and Construction Industry Training Organisation (BCITO) and the Registered Master Builders Federation. All those involved in the competition were very impressed with the apprentices that entered.

The three sponsors all contributed a judge to each of the regions. One of the judges, Richard Rozbicki of Carters Christchurch, says the judges were very impressed with the skills the apprentices had, along with their attitude and level of professionalism.

“Also, the enthusiasm and pride these apprentices have for their profession is really great to see, and this competition can only be good for the industry,” Mr Rozbicki says. The Apprentice of the Year winners of each of the regions received an Outward Bound Leadership course to the value of $3500 and a study grant worth $2500.

The runners-up also received a variety of prizes. Entry forms were distributed through Carters branches in the regions and were also available on-line. Entrants were asked to provide a submission on why they should win, a submission from their employers and a description of a building project demonstrating their skills and learning during their apprenticeship.

The judges then had to cipher through the entry forms and submissions to narrow it down to the top apprentices who then received on-site visits by the judges. The judges found this task very difficult as there were many great apprentices with fantastic skills that had entered.

All the top apprentices were invited to attend one of the regional award nights around the country in September and October. These were well attended events, with dignitaries from local government, councils, local sports figures and even television celebrity builder John “Cocksy” Cocks.

Carters says this is a fantastic initiative and has received great feedback from all those involved. In recent years the building industry has received a lot of bad coverage with cases of poor weathertightness, use of impractical products, cost-driven mentality and poor design.

This, in turn, has brought about changes to the Building Act and the introduction of Licensed Building Practitioners. This competition recognises and rewards excellence in skills, professionalism and attitude of all of these attributes in young builders.

Carters says it will help improve the industry in future years and raise the benchmark of building to a level that is beneficial to all. This competition will be expanding to more regions next year, and can only get bigger and better in years to come.

The Regional Apprentice of the Year winners were: