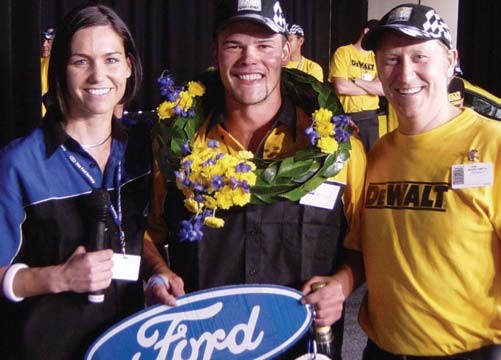 The DeWalt Ford Challenge was decided in a nail-biting grand final at the Big Boys Toys expo in Auckland recently, with wildcard Boyd Stewart the surprise winner of the national Champion Driver competition.

Mr Stewart only won his ticket into the final the day before, by trying the Challenge, which involved removing a Ford Falcon XR wheel from an axle, and securing it to a different axle with an 18V DeWalt impact wrench.

After giving the Challenge a go, Mr Stewart, a builder from New Plymouth, secured the fastest time over the first two days of the expo and the right to take a shot at the 2005 title. Eight other contenders took part in the final. Several had spent the previous few weeks practicing and bringing their times down by fractions of a second.

With a winning time of 26.58 seconds, Mr Stewart won a brand new Ford XR8 Ute and $2000 worth of DeWalt tools. “I’m seriously stoked,” Mr Stewart said after his win. “I was feeling sick beforehand but I managed to keep my concentration. I can’t believe it!”