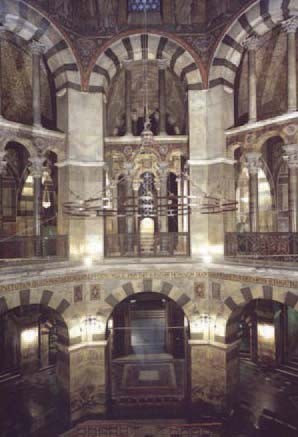 Charlemagne’s imperial Palatine Chapel at Aachen, Germany, is perhaps the single greatest example left to us of the cultural renaissance that swept Western Europe in the late 8th and early 9th Centuries.

This masterpiece of Carolingian architecture, with its intricately designed core, now forms the centrepiece of Aachen Cathedral. It was designated a UNESCO World Heritage site in 1978, and provides an object lesson for architectural students — and politicians — everywhere.

Emperor by design Charlemagne, King of the Franks, was crowned Emperor of Rome in the West by Pope Leo III on Christmas Day 800AD. With one eye fi xed fi rmly on the lessons of history, he sought to secure his position by demonstrating that he was the legitimate heir to the great rulers of the past.

At the top of his To Do list was the restoration of the Roman Empire in the west. For many years his armies had been busy accomplishing this in the normal run-of-the-mill imperial manner. By 800, Frankish-ruled territory covered a great swathe of Western Europe. Charlemagne, himself, went after the minds and hearts of his people by encouraging a revival in classical learning and culture.

By imperial decree, Carolingian architecture, arts and crafts sought to emulate the artistic achievements of early Christian Rome and the Byzantine Empire. Charlemagne led from the front. He commissioned Frankish architect, Odo of Metz, to build him an imperial chapel styled after some of the great Christian churches of the past. Odo based his design on the octagonal Byzantine churches, in particular the 6th Century martyrium of San Vitale in Ravenna built in 547.

This model enabled Odo to provide a symbolic link between Charlemagne’s empire and that of Justinian, the last great Roman emperor, universally acknowledged as a strong ruler and a superb administrator.

The chapel was constructed between 792 and 805 on the site of an earlier, smaller house of worship. Its basic structure is a domed, double-shelled, two-storeyed octagon, surrounded by a 16-sided ambulatory. Numerous architectural echoes from the past occur throughout the structure but, whatever its architectural pedigree, the interior design was structured on a cunning plan to display the great cosmic order of Charlemagne’s government.

To the glory of God — and Charlemagne For starters it was a double church with strict segregation of masters and servants. On the ground level servants attended divine service at the altar of Mary. The nobles for their part assembled in the western choirs of the octagon around the emperor’s seat and looked directly across the octagon to the altar of the Saviour in the eastern choir.

This separation of east and west is the bee’s knees when it comes to ecclesiastical architecture. The altar lies in the sacred east, while the faithful assemble in their stronghold in the west. The arrangement at Aachen also meant that the altar of Mary, the Lord’s servant, was below that of her Son which just happened to be on a par with that of the emperor.

The symbolism was not lost on the unwashed masses. The cupola soared above both people and masters. It was the sphere reserved for God alone. Here Odo outdid himself. The dome rose to a height of 30.9 metres, making Charlemagne’s personal chapel not only the first completely vaulted building in western Europe but also bestowed on it the highest vaulted interior of any northern European building for centuries.

Odo covered the inside of his cupola with golden mosaics that illustrated the fourth chapter of the Apocalypse. Christ was shown enthroned among the twenty-four elders along with the four symbols of the evangelists: lion, ox, man, and eagle.

As a consequence, the heavenly splendour of the dome outshone the spectacle of earthly pomp offered on the middle fl oor with its gilded bronze railings and polished pillars. From the ground fl oor the servants and the common people could only gaze up in awe at the totality of this splendour — while they stood among plain pillars of ordinary stone.

They were never left in any doubt as to their place in the scheme of things! In the event, Charlemagne only got to use his completed chapel for nine years. He died in 814 to be buried in the Charlemagne Shrine now situated in the Cathedral choir.