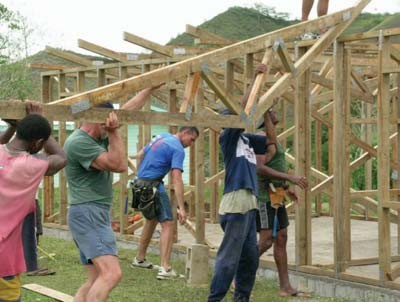 If New Zealand builders think they have problems dealing with climatic conditions at times and material supply worries in an overheated market such as New Zealand’s construction industry, they should try building homes in remote jungle in Fiji.

That’s the challenge that Registered Master Builders Marty van der Burg and Stephen Brown, along with two of Marty’s staff and 18 other volunteer helpers, took on recently. They went to Fiji with the Habitat for Humanity organisation — a non-profit, non-denominational, international Christian housing organisation.

It builds simple, decent, affordable houses in partnership with those who lack adequate shelter. Since 1976, Habitat has built more than 175,000 houses, providing shelter for nearly 900,000 people worldwide. Now at work in 100 countries, the organisation builds a house every 26 minutes.

The village they worked at was 50km inland from Sigatoka, Fiji’s fourth largest town half way between Nadi and Suva. After a bumpy bus trip up a gravel road following the Sigatoka River, there’s an hour’s walk up a 4-wheel drive track and then across the river by foot.

“It’s fairly remote,” Marty says with just a hint of understatement. “There’s running water but it’s from the local dam and there were problems with supply that a couple of the boys in the team had to fix.”

The team aimed to build four houses at the village, but material supply problems beyond their control, coupled with an outbreak of dysentery, meant they didn’t quite reach their target. Marty suspects the illness was contracted from river water drank at a kava ceremony because, apart from that, they drank only bottled water.

Delivery of materials was one of the bigger problems to overcome. “Materials — when they did arrive — were retrieved after being dropped off on the opposite side of the river. The local boys would go and pick them up by hand and walk across the river and up to the village — about a 10 minute walk.

Or sometimes they would use oxen to transport the materials up to the village.” Out of level The concrete slabs for the houses were already in place when the team arrived on site. However, they were out of level.“They were all over the place, but we just had to work with it. We had no choice.

We arrived on site and the four slabs were done. Our aim was just to get four houses built. “They were just a basic frame construction on the outside, and no lining on the inside except the two partitions which had hardboard on one side.

So you could see the trusses and all the internal framing, but that was fine. “We had to make all 36 trusses by hand. On the first day we didn’t even have a generator operating so it was, literally, by hand. Afterwards we had one generator to power two saws.

We brought in all our own gear and then we left some of it for Fiji Habitat for Humanity to use themselves.” The team of volunteers included school teachers, an architect, some ex-roading engineers, a nurse and a couple of retired people.

“The four builders basically took charge of the day-today running of the team because we had no idea what the skill level amongst the volunteers was going to be like.“The whole trip was undertaken on a volunteer basis, so every person that went took time off work in New Zealand, paid for their trip to go there and volunteered to work for two weeks — that’s how they save on the labour cost.”

The team was in the village for nine days, of which they worked eight with Sunday off. The conditions were, understandably, extremely hot and humid because of the inland location, so the team had to ensure they stayed hydrated while working. “You just slow right down.

You can’t work in the heat of the day so we would have a couple of hours off in the afternoon between one and three o’clock.” Marty says the Habitat for Humanity programme is a good avenue for builders to send apprentices overseas, to give them exposure to another culture and to enable them to use their skills to help others less fortunate.

“My apprentice was in charge of a team the whole time, so he was basically in charge of building a house almost. He was helping to teach the volunteers different skills. For example, we had a roading engineer and a geography teacher making the trusses.

They did a fantastic job making 36 of them!” Marty says this type of work always results in positive feedback. “When I told my clients I was going to be away for two weeks with a couple of my guys, they just thought it was the most fantastic thing.

They realise Habitat is a good organisation where you’re not giving somebody a handout but a hand up really. Cool experience “It’s such a cool experience. The rewarding part is the cross-cultural experience, going into a culture which is basically third world. You compare your own lifestyle with theirs and realise how happy they are despite not having the trappings that we have in our modern society.

“Another thing is the ability to give of yourself and your talents to help other people — I always get a kick out of that. “My guys really did enjoy it. I had to con them into going. Part of the cost is your airfares and expenses while being there which is minimal.

But you also give — in this case a $600 donation — money which went towards materials and that kind of thing, just to bring the cost of the housing down for the locals. “My boys paid that part of it but the company paid the rest, and then I also paid them while they were working over there.

“That was the incentive I gave them to get them over there. And they thought two days at the resort afterwards was pretty cool. Building relationships “But the fact of the matter is they found it hard to leave the village. They had such an enjoyable experience meeting the locals, building relationships with them and getting to know them.”

All 22 of the team were housed in a big village hall, similar to a marae. “And the food in general was absolutely fantastic.” On the last night the villagers put on a big feast for their visitors. “They roasted up a huge pig and treated us like royalty in their own special way. It was fantastic. They really do look after you.”

On a personal note, Marty’s illness meant the exercise was a little disappointing. “No, I wasn’t too good. I was going in and out of consciousness, I was so dehydrated. I was on a drip for three days so out of the eight working days I only worked three days.

“The day after I got back from hospital and started working again I didn’t get a hang of a lot done and I started feeling a little bit annoyed. “But there’s nothing you can do about it. You’ve just got to roll with the punches, that’s just the way it is.