Home Latest News BF better than a BA – no BS 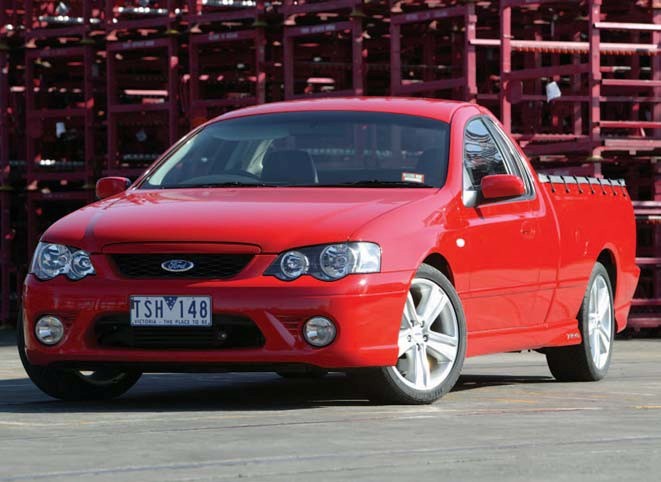 If you thought the BA Falcon was the best Ford to come out of Australia — as I did — check out its replacement. The BF is a “Brilliant Falcon” and that’s no BS! The launch of the BF Falcon range dovetailed neatly with the new SY Territory and a stunning line up of Ford’s performance vehicles, which made the launch at the end of last year that much more memorable and exciting.

Ford called it the Copperhead launch — some computer thought it was a cool name and it stuck. Personally, I liked the “Copperhead” name. It said to me that this was the business end of the Ford bullet, designed to make a significant impact. And one of the new colours certainly made an impact . . . The colour is called Toxic — a yellow/green that goes beyond Citrus — fl avour of the month at Ford, obviously.

Anyway, the appropriately named Toxic is only available on limited BF product, as is Fantasy, the first factory application of chameleon paint that changes from blue to purple in certain lights. It’s still to come, but keep an eye out for it. In the meantime, what is here is the inclusion of Dynamic Stability Control on selected BF Falcons and on the rear wheel drive version of the Territory and the TX AWD and TS AWD models.

As well, all petrol sedans and wagons — there are Egas versions that won’t have this — pick up traction control systems. Limited XR Utes gain this too. But the big news has to be the six-speed automatic transmission. From master transmission company ZF, the six-speed gearbox with sequential sports shift features on the Fairmont Ghia, the XR6, XR6 turbo, XR8, Fairlane Ghia, Fairlane G8, Fairlane LTD, XR6 turbo Ute and XR8 Ute.

My pick of the bunch would be the XR8. When this car arrived in BA guise, it was best described as a raw powerhouse, which seemed to put power over refinement as its major selling point. It had appeal in that regard of course, but not everyone was that fussed on the brutish-ness. Now, with the six-speed auto, the XR8 is king of the hill when it comes to power, but it is so much more manageable and refined.

The six-speed auto has also found its way to the Territory — a runaway success for Ford on both sides of the Tassie — in all but the TX rear wheel drive model. This does get a sequential sports shift auto as well as a reworked 4-litre I6 engine now dropping 190kW and 383Nm of torque, but the 6-speed goes into the TX AWD model, the TS AWD with reverse sensing system and optional rear camera and the Ghia, with its standard reverse camera and Dynamic Stability Control.