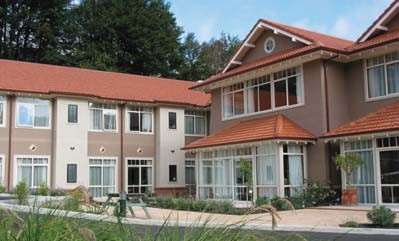 The judging panel named the Dunedin building company national winner of the Commercial Award over $5 million for creating a building with a “wonderful atmosphere enthusing those who live there”.

“The complete renovation of this property required great sensitivity, and the builder finished the smallest details to an exacting standard,” according to the panel. Ross Home was first built by the Fletcher brothers and was originally opened in 1918.

Graham Marshall of Naylor Love says it was a privilege to work on the same land that the Fletcher brothers worked on so many years before. “You don’t often get the chance to work on a building constructed by such a revered team. Contributing to the history of an iconic building and making it into a comfortable place for the people living there was deeply satisfying,” Mr Marshall says.

The existing building and site were completely redeveloped by a 40-strong team over a 28-month contract period. New accommodation wings were created, the commercial kitchen was overhauled and the old coal-fired boiler heating system was decommissioned and a modern gas-fired boiler installed.

The building was inhabited throughout the contract period. Due to the sensitive nature of the occupants and the essential services that needed to be maintained throughout construction, co-ordination and planning were a high priority for the construction team so their impact was minimised.

“Construction noise, vibration, dust and planned service shutdowns were what the residents had to put up with over this period, but they took a keen interest in the activities and welcomed intrusion in their daily lives. We shared a great sense of camaraderie,” Mr Marshall says.

The Naylor Love team was excited to receive a national award for its efforts, and Mr Marshall admits that it was great to be recognised for the project. The team is involved in another rest home redevelopment, and he says they are relishing the opportunity to make a difference. “Contributing to your community is one of the best things about being a registered master builder, and working on Ross Home highlighted this.”