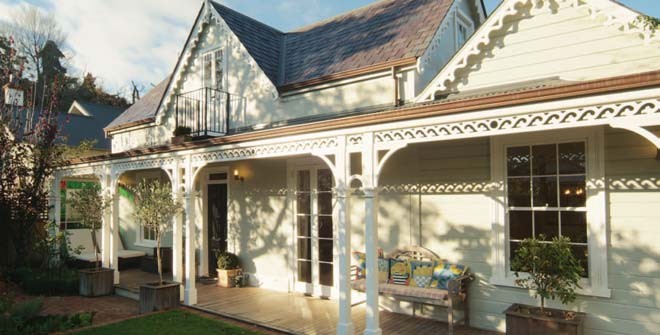 An impeccable character renovation elevated Nelson builder Paul Brockie to national winner of the PlaceMakers Renovation up to $250,000 Award in the Registered Master Builders 2005 House of the Year Awards, held in association with PlaceMakers.

The renovation was so seamless that the national judging panel initially wondered what they were meant to be critiquing when they arrived at the home. Once they were fi nished judging they were emphatic in their praise.

“Paul Brockie Builders has transformed this 19th Century home from a state of disrepair to a graceful, spacious building that caters to the demands of modern life without compromising the property’s character. This sets the standard for all character renovations,” the judges said.

A key part of the brief was that the addition had to match the beauty and character of the original home, Mr Brockie says. “To ensure we achieved the right look we used old photographs and sketches of homes from the same era, and spoke with a local historian who provided invaluable assistance.”

Craftsmen from around New Zealand were contracted to create fineries such as the lace and fretwork on the verandah. The posts on the verandah were custom made so no bolts or nails are visible. The exposed curved rafters around the verandah had to be cut and fitted together precisely so they looked the same from all angles.

To complement this picturesque home a Juliet balcony with iron balustrades was placed on the upper level at the front of the house. The interior was transformed and although original doors and ceiling heights were maintained, only the staircase and a bay window in the lounge remain as original pieces.

A team of two builders completed the project, and Mr Brockie says although they knew they had completed an historic piece of building, they were still stunned to be named a national winner at the gala event.

“You never think you will win the top prize, and this makes it even more special. Even now I am surprised how many people know about the award and congratulate us on our achievement,” he says. There is no doubt Paul Brockie Builders will be busy perfecting and honing homes in Nelson for years to come.

“We stake our reputation on quality work and enjoy the renovation process. To take an original home and give it a new lease of life is very satisfying — and rewarding.”