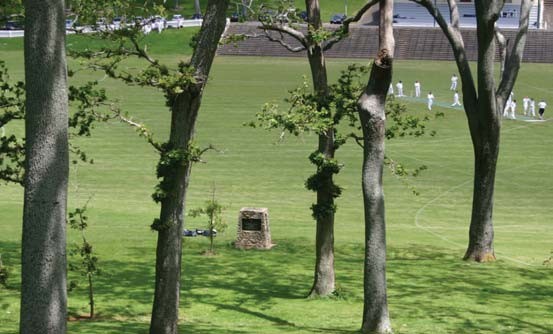 Anzac Day 2005 saw a new memorial unveiled in the Auckland Domain. It is a simple cairn commemorating the service and sacrifice of soldiers of the Auckland Regiment in 21 campaigns since the Anglo-Boer War of the late 1890s.

It stands forward of the oak grove on the lower slopes of the knoll of historic Pukekaroa Hill to look across the playing fields towards the cricket pavilion. Since the Regiment’s centenary in 1998, past and present soldiers have wanted a memorial sited in the lower domain, an area that holds strong ties for them.

It was here the Rough Riders assembled in 1898 before their departure for the Transvaal. The field provided a camping ground for troops before they embarked for Gallipoli where Aucklanders and Northlanders were the first New Zealanders to wade ashore.

For too many of these soldiers the lower domain would be their last touch of New Zealand soil. Importantly, on the ground below the cairn, the Regiment was presented with its first Colours by the Countess of Ranfurly in 1899.

Subsequent replacement Colours were received here in 1929 and 1973. Wellington does it differently yet getting the cairn built proved something of a campaign in itself. The idea of a memorial had been mooted in 1997 prior to the Regiment’s centenary in 1998.

The Gallipoli connection was foremost in this early thinking, and the Government of Turkey offered gratis stones from Anzac Cove with which to dress the memorial. Wellington obtained similar stone from Chunuk Bair in August 1998, and by the year’s end had mounted it on a memorial to the soldiers of the Wellington Regiment in the cathedral.

Things, however, moved more sedately in the Queen City, with the Regiment’s initial 1997 proposal rejected by the Auckland City Council as neither acceptable nor possible. Things simmered for five more years but gained some traction in 2002 at the time the late Gene Leckey, Regimental Association president, met with newly elected Auckland mayor John Banks.

Perseverance 101 A certificate of compliance was required as well as consultations with the Community Planning Group, the Heritage Division, the Hobson Community Board, the Recreation and Events Committee, the Historic Places Trust, arborists and local iwi — to name a few.

Without the perseverance and tenacity of Captain Blake Herbert, Regimental Archivist, it is conceivable there would be no cairn in the domain today. For Blake, the project had long become a labour of love, and he received the final Big Tick from the council in March 2005.

All stops were now pulled to ensure a successful consummation by Anzac Day. Local construction firms moved more than heaven and earth to ensure that on April 25, following the dawn ceremony at the Cenotaph, Major General Mataparae was able to undertake the unveiling.

However, it ain’t over yet. The Auckland City Council already has plans to shift the cairn. It would like to place it in front of the museum when it revamps the Cenotaph area.