Home Latest News Makes you green with envy, don’t it? 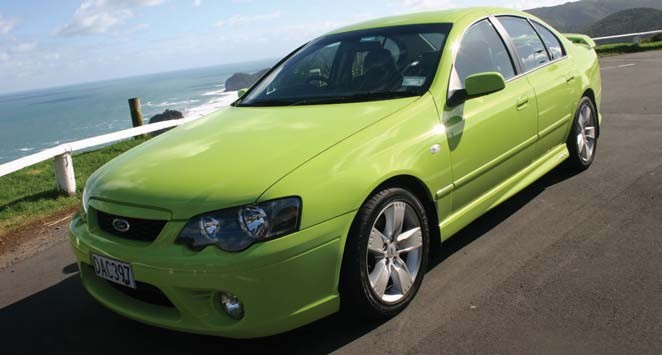 While colour choice is largely subjective, there’s no denying that Ford’s intriguingly named toxic shade turns heads. From past experience, I know that without even seeing the photograph on the page that readers are not going to get an accurate idea of this colour.

So while it’s true that a picture is worth a thousand words, you really need oh, about a thousand and twenty to get a good idea of this colour. That being said, toxic can best be described as: “green as the colour of the radioactive material that Homer Simpson fishes out of his collar on the drive home”.

Ask your kids about it if you’re not a Simpsons fan. This colour doesn’t quite glow in the dark, but it might as well. One thing’s for sure, this car — in this colour — certainly gets noticed! But what about the car itself? Well, this is the XR6T (for turbo) Falcon — the car to get if you have a moral or financial issue with normally aspirated V8s.

But unlike other cars where a turbo does not make up for the lack of the extra two pots and, therefore, the rewarding thrill of driving an 8, the XR6T comes up trumps. It has power to burn and gives you a sense of refined delivery, of sophistication in speed. Naturally, the XR6T comes with all the goodies that the new BF Falcon range has to offer, including dynamic stability control.

This system uses the upgraded ABS system found in the BF range and adds to it a conventional traction control system. In a nutshell, DSC helps maintain stability when the vehicle approaches its physical limits, through programmed intervention in the braking system and powertrain or a combination of both.

It prevents the wheels from locking when the brakes are applied. And TCS limits wheel spin during acceleration. So when is it going to do its best to save you? DSC is likely to engage if you are taking a corner too fast, avoiding obstacles, encountering ice or snow, driving on slick surfaces or encountering a change of surface — say, gravel to seal or vice versa. It’s worth remembering though that while DSC is great news as a driver aid it won’t defy the laws of physics.

And then, of course, you have the new six-speed auto gearbox with Sequential Sports Shift manual option, a limited slip differential, performance brake package, six-stack CD player and rear grab handles — sounds silly, but you’ll come to appreciate them.

And under the hood lies a 245kW turbo-charged, 4-litre, in-line 6 powerhouse with 480Nm of torque, just to name a few features. You want more info? OK. The Barra 245T has new variable cam timing and the camshaft profi les have been refined, while dual knock sensors have been incorporated into the engine to further refine spark ignition timing.

All of this gives you maximum 245kW at 5250rpm and maximum torque of 480Nm from as low as 2000rpm. That’s only the tip of the iceberg — your Ford dealer can point out all the other bits and bobs, though he/ she might miss something that my daughter didn’t.

The sports seats in the XR6T have a distinctive swirl pattern to the cloth which, I suppose, needs a girl’s eye to identify. Little Miss 5 going on 20 tells me it makes the seats look cooler than the ones in mummy’s Mondeo, which is kind of the right thing to say when you want a lift to school in “the big green Falcon please daddy”?

For the trainspotters, the XR6T comes standard with 17-inch wheels, though 18s are available as an option, and the independent rear suspension, as seen on the preceding BA Falcon and, indeed, much of Ford’s product line-up today, is a little special on the XR6 — it’s the sports version for that feeling of a little more control. All cool.

Now, how does it drive? The biggest advantage the BF has over the BA Falcon line up is the ultra smoothness of the drive. With the changes to the suspension and steering systems combined with the stability control measures, the BF range puts paid to the myth that big cars are unwieldy.

Steering is precise and effortless even when all those Newton metres are doing their thing to get the 245kW for power from the engine to the wheels. At full noise, the XR6T is extraordinarily controllable. Marcos Ambrose speedsters?

And for those who don’t fancy themselves as the next Marcos Ambrose in terms of speed, but are looking for spectacularly smooth driving, that ZF 6-speed is one seriously slick transmission. While you can have a lot of fun on the twisty bits with the shifting, leaving the gear in D is almost as rewarding.

It certainly takes any dumb decisions out of the equation when it comes to spirited driving. And all of this for how much Mr Ford? You can start talking to your dealer if you have something around $57,990 to spend.

That’s the RRP of the XR6T BF Falcon with the 6-speed manual/auto transmission, which has to be one of Ford’s best efforts yet.