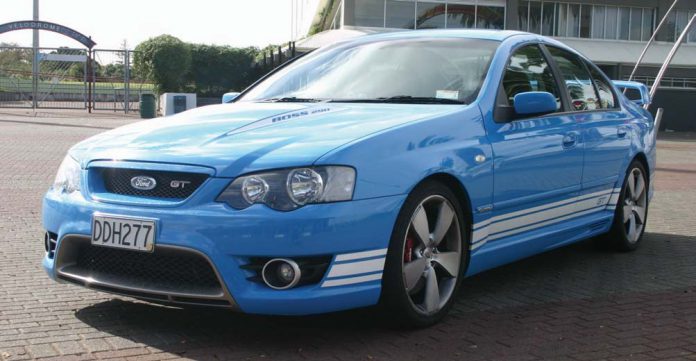 Well, we had a car that turned you green with envy with the XR6 turbo not so long ago and, so, the good folks at Ford felt it was time to engender an element of class into these pages. As a result, we were all set to do a nice big story on the very luxurious Fairmont for this issue.

However, the best laid plans of motoring correspondents and car companies are often undone by mice — something like that anyway — and the Fairmont had to rush back to Ford before our drive could really get under way.

That’s OK though, because the very helpful Ford people promised us something else in return — something a tad smaller perhaps. I was waiting outside Ford HQ for my assumed Fiesta or Focus, when the earth started to shake, buildings trembled, parents took small children off the street, Civil Defence failed to notice a sizeable tremor and around the corner came Ford’s answer to King Kong — the BF version of the GT Falcon.

“Bionic blue” in colour and bulging in the bonnet, this FFPV — that’s Fabulous Ford Performance Vehicle — sidled up alongside me and made me an offer I couldn’t refuse as the door opened invitingly. The delivery driver grudgingly asked me to sign for the car and damn near had to be forcibly evicted so that Yours Truly could get the rubber on the road. Needless to say, with the full whack of the Boss 290 powerplant driving through the six speed automatic, I did leave just a hint of rubber at the driveway.

But it was only a bit and, besides, with the 245/35ZR19 tyres, you can afford to impart some of the tread to the highway. Now it’s fair to say that when the FPV GT first put in an appearance it was all about power and, some uncharitable souls would say, at the expense of everything else.

However, the FPV lads and lasses (well, I’m guessing there are some) have had some time and experience at lifting their game a little. As a result, you now have all the advantages offered by the BF upgrades plus a little performance tweaking at FPV to give you power and refinement, and the ability to stop pedestrian foot traffic who go gaga every time you have the engine idling.

The original Boss engine gave the impression that it was not happy about being in its box, and tended to thump a bit from side to side when not under load. That’s stopped. And if you thought Ford must have put the 5.4L Quad Cam 32 valve V8 on Prozac to calm it down, think again.

You still get all 290kW at 5500rpm and, more importantly, the 520Nm of torque at 4500rpm that you had before — it’s just that it is now considerably smoother. You still have the push button start system and the silver shot seats (very cool Ford, very cool) and the phenomenal 6-speed ZF auto that makes rush hour a breeze and the weekends away well worth the wait.

It may be a little tough justifying the FPV GT as a working vehicle, but give me another 10 seconds sitting in the right hand seat on an open stretch of highway with nary a soul in sight — least of all the boys in blue — and I’ll certainly be able to come up with something.

In the meantime, you busy builders out there have a better potential of owning one of these magnificent machines than I ever will, so I feel I can tell you the price, if only to give you an inducement to keep hammering at those trusses and stopping up the gib.

You can put your tool belt in the back of the GT and turn the key — erm, push the button — for $78,090 and make all us motor noters green with envy at the same time.