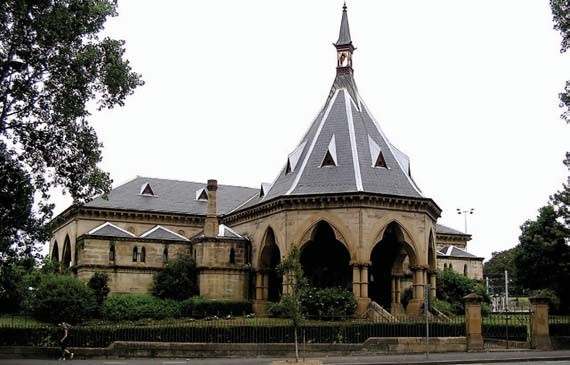 In the mid-19th century Sydney had a grave issue. The city had run out of cemetery plots. To resolve the matter, the City Fathers purchased a property near Lidcombe, 18km from the CBD. Here they established the Rookwood Necropolis, or City of the Dead, one of the largest burial grounds in the world.

The dead centre of Sydney The deceased and mourners were transported to and from the cemetery by a dedicated railway, complete with two Mortuary Stations, aka Necropolis Receiving Houses. Something more tasteful was required than the corrugated iron and timber shelters that typified New South Wales railway buildings of the day.

The Regent Street station was topped by an eyecatching spired bellcote — that lacked any bell. Rookwood differed in having a handsome tower — and bell. Long before political correctness became the norm, neither building displayed anything related to any sect, denomination or creed.

The Receiving Houses proved acceptable to all Christian and non-Christian beliefs. Even agnostics and atheists found it hard to take umbrage. Last train to Rookwood Hearse carriages were attached at the rear of each train with the coffins loaded onto shelves.

At Rookwood the coffins were unloaded onto wheeled litters with care being needed to ensure the correct coffi n was allocated to the correct funeral party. The funeral train also transported supplies for profligate graveside wakes that became part of the Rookwood tradition.

Leftovers and empties were disposed of in the grave as a valedictory gesture. The Rookwood bell would warn mourners of the return train’s impending departure. The litters were now used to carry worse-forwear mourners back to the platform where fracas often erupted between some of Sydney’s diverse ethnic groups.

Reincarnation, Aussie-style Use of the Necropolis railway peaked in the 1900s. By the 1920s motor hearses had taken over, with buses chartered to carry mourners — and supplies. The service revived during World War II when petrol rationing kicked-in but fell into disuse in post-war days.

The last run was on April 3, 1948. The Rookwood terminal was dismantled and rebuilt as an Anglican church in Canberra. For a brief period the Regent Street station became the Sydney terminal from which greyhounds and their owners could go to the dogs.

In 1949 it was reborn as the centre of a rail parcel delivery network. Today the station has been fully refurbished, and can be hired for private functions or for cultural entertainments. It comes complete with its own ghost.

A woman in a black lace veil is regularly seen pushing an old Victorian pram along the platform accompanied by phantom footsteps.