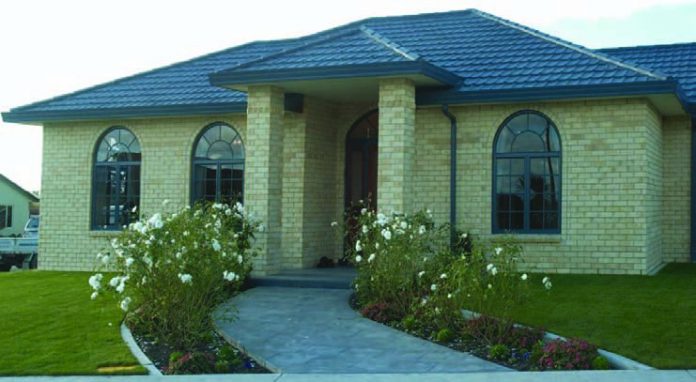 Gordon Sanson of Homeworx Design & Build Ltd said the entire team was “rapt” to take away the PlaceMakers Supreme Award for their Havelock North property. “Our home was entered in the New Homes $350,000- $450,000 category so we were dubious about our chances against million dollar properties,” Mr Sanson says.

“The team was absolutely delighted to win the Supreme Award and the support from clients and colleagues has been amazing. I have received many congratulatory phone calls,” he says. The award-winning home makes a bold first impression with its impressive brick cladding and stylish curved windows.

The entranceway, which is three metres high, gives the home a true sense of grandeur. “We paid special attention to detail on this property, from the timber rosettes inserted on all the door architraves to the extensive tiling.

“Neutral colours have been used throughout the sophisticated three-bedroom property so as not to distract from the many features the home has to offer.” Gemco Construction was the other major winner on the night, taking away the RMB Commercial Project of the Year Award.

The company was confident about the high quality of its renovation of a 100-year-old school hall in Hawke’s Bay. Gemco’s Darren Diack said the project team was not nervous on the awards night, but receiving the RMB Commercial Project of the Year Award was a “fantastic bonus”.

The brief for the Woodford House school hall project was to maintain the historic, colonial look of the building and ensure the school stage was visible from all seating locations. “The plan was to match the old with the new to create a seamless look, so people would not even know the building had been renovated,” Mr Diack says.

“We did not cut any corners, even researching numerous suppliers in order to source a pair of doors to match the original ones. “They were eventually discovered at Pacific Doors in Lower Hutt, and were the doors that had been designed for the refurbishment of Parliament.”

Hawke’s Bay RMBA president Leno Federico was impressed with the high standard of this year’s entries. “The House of the Year and Commercial Projects Awards event is a true celebration of the quality work that is taking place in the Hawke’s Bay and throughout the country,”