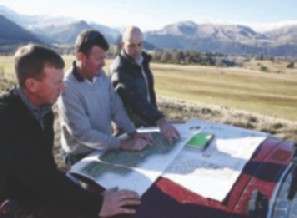 New Zealand’s original premier lifestyle resort has announced details of a half billion dollar, 200-plus home housing development. Five-star luxury resort Millbrook is well advanced with the urban design process, and hopes to lodge for resource consent with the Queenstown Lakes District Council for Stage One of the development in the next few months.

The first stage will consist of 58 sites, a new nine-hole golf course designed by New Zealand golf legend Greg Turner, and a new driving range. Sixty hectares of land to the west of the existing resort will be developed for Stage One, which will consist of 29 land sites and 29 house and land packages. This is land Millbrook has owned for many years, and is currently used for the driving range, grazing and, in the past, has been used for Millbrook’s famous open air concerts.

Work is due to start in autumn 2007. Millbrook property and development manager Ben O’Malley says this is a long-awaited project which has its own special zoning for development.

“Since Millbrook’s inception 18 years ago there has always been a vision of creating New Zealand’s biggest and best country club and lifestyle resort.

The owners and the board have put their full weight behind this development.” The building sites are all on sunny, elevated northfacing slopes overlooking the new and existing golf courses, some with views of Lake Hayes, and all with views to Coronet Peak, the Crown Range or The Remarkables mountain ranges.

Land contours and geographical rock formations of the land have also lent themselves beautifully to the new golf course, which will integrate with the existing Bob Charles-designed 18-hole championship course to ultimately offer three interchangeable nine-hole courses.

“We won’t have to do any major earthworks because the land is already beautifully set out for a golf course with natural water features, including Mill Stream, and undulating land and rocky outcrops,” Mr O’Malley says.

He says Millbrook has strict design controls in place on the land to ensure consistent high standards of style and design for developments at the resort. All purchasers will also be required to become Millbrook Country Club members.

A highly experienced and visionary consultant team has been employed by Millbrook to bring the long-held dream to reality. It includes golf course designer Greg Turner; Paddy Baxter from the Baxter Design Group, who is one of Millbrook’s original designers; Fred van Brandenburg, one of the original architects of the resort; Signal Management Group from Dunedin; surveyors Clark Fortune McDonald; planners John Edmonds and Associates; and engineers Montgomery Watson Harza.