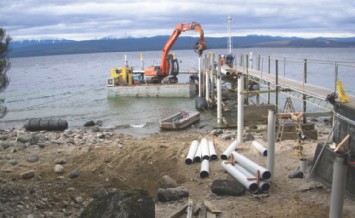 Urban sprawl and the increasing scarcity of land are forcing authorities and developers to consider building sites with soil characteristics that require innovative building techniques, such as using steel foundations.

The result has been vast improvements in foundation technology, including steel pile and steel pile driving systems. However, according to a Steel Construction New Zealand spokesperson, the use of steel foundations has taken root in New Zealand only in the past 10 to 15 years.

“The greatest innovation in steel foundations must be screw piles. They are particularly useful when the hammering, noise and vibrations that accompany standard pile driving techniques are undesirable,” the spokesperson says.

Obvious benefits of steel foundations are their strength and flexibility of application methods. A steel pile foundation, like any other, must transmit a foundation load to solid ground and resist vertical, lateral and uplift loads.

Cost effective
A structure can be founded on steel screw piles if the soil beneath its base is unstable and weak. Such a foundation may be more cost-effective than ground improvement.

Also, with a heavy construction the bearing capacity of the shallow soil may not be adequate and again, steel pile foundations, standard or screw, may be indicated. These piles can also be used in normal ground conditions to resist horizontal loads.

“Steel screw piles are very useful to construct foundations for structures such as wharves and offshore platforms. This method was used in the construction of the wharf on the western shore of Lake Te Anau recently,” the spokesperson says.

“Access to the building site was not good, so the screw piles were flown in by helicopter. You can do that sort of thing with steel, which is another advantage.”

Steel piles are also suitable for handling and driving in long lengths, and can easily be lengthened by welding, meaning they are much easier to “splice” than timber and concrete.

Steel corrosion is always a threat in low pH soil but, says the spokesperson, this risk can be contained, as described in the New Zealand Steelwork Corrosion Coating Guide.

Other relevant standards for building with steel are the HERA Report R4-133:2005, SESOC standards and the British SCI standards.

The spokesperson says steel building practices make smart choices. Referring to an article published in a New Zealand construction magazine last year, he says historically in the commercial sector the construction industry has compared three construction materials for their relative costs – concrete, steel and a hybrid of both.

Steel frame lighter
“Consider this. When a high rise has a concrete frame, a larger concrete foundation is required to cope with the weight, and this is expensive. Steel framed buildings are lighter, require less foundation and can be erected more quickly, giving developers a faster return on their investment.

“Alternatively, the foundation could be a raft solution, obviating the need for piling. The building that’s erected on the raft would have to be light, so a steel frame would be the obvious choice.”

The article showed how construction time saved can translate into thousands of dollars of far greater signifi cance than material cost variations. The conclusion was that even with a simple, low-rise structure, there are substantial benefi ts to be gained from saving time on construction.

“The smart approach is not about raising the tempo at which the work is done. It’s to save time and ensure that maximum efficiency is achieved in the construction sequencing through smooth programming and the integration of fast, compatible systems,” the spokesperson says.