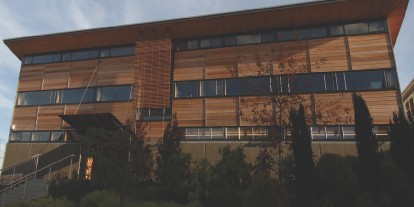 The Columba College Sports Centre in Dunedin is an outstanding project that judges described as user-friendly, noting that it set the standard for other educational institutions. Naylor Love also won the Department of Building and Housing Education Commercial Project category award for the facility.

The multi-million dollar privately-funded gymnasium, now officially named the Marsh Sports Centre, took 11 months to build and was completed in time for the students’ return at the beginning of the 2006 school year.

The facility was designed by Tim Heath of Architectural Ecology. His design concept for the gymnasium was based around the idea that a gym is simply a box for playing games. Therefore, light projections and colour were minimised to enhance the game-playing experience.

The judges acknowledged that Mr Heath and Naylor Love had cleverly achieved this. “This building enthuses and inspires those that use it — the contractor has done a remarkable job,” they stated.

The stylish facility provides students with international-sized netball and basketball courts, full-sized badminton and volleyball courts, a circuit room with specialised fitness equipment and, of course, showers, toilets and two changing rooms. Each of the full-sized courts can be used as multiple practice courts.

Staff can enjoy office spaces, showers, toilets and change rooms, and a control room that gives great visual surveillance of activities in most ground-floor areas. Two physical education classes can be held at a time thanks to a motorised curtain which divides the gymnasium into two spaces. A perforated ceiling and slotted acoustic panels on the walls help reduce the noise in the large gymnasium space.

“Careful consideration was also given to sustainability, with particular awareness of Dunedin’s often cool winter climate,” Mr McGill says. Gas-on-demand water heaters supply the showers, passive and high level natural lighting have been coupled with highly reflective ceilings for maximum effect and natural ventilation has been achieved with actuated louvres.

Two classrooms (one with lecture facilities) are on the second level and double as galleries to the gym. The layout of classroom windows was designed to maximise natural light and long views without undue heat loss, or unwanted projection of light into the gym.

In their final comments the judges noted how beautifully designed and executed the project was. “The clever use of classroom galleries, natural light and sustainable materials makes it a comfortable and easy place to work and play. The attention to detail with the acoustics, passive lighting and ventilation are impressive.”

Sitting high on a ridge in a Dunedin suburb, the large complex’s wooden cedar panelling was chosen especially to give low visual impact. The western red cedar has not been treated so that it is allowed to weather and, in time, it will turn a silvery colour. Other materials and texture were used to give a scale to the structure and integrate it with the suburban neighbourhood.

“In addition to the facility’s very distinctive design, the secret of success was the high level of trust and the collaborative relationship that was enjoyed between the client, design team, contractors, consultants and construction team.”

This is the fourth time Naylor Love has competed in the RMB Commercial Project awards. They have been category winners three times and have won the Supreme Award twice — once in 2000 and again in 2006.

“The opportunity to benchmark our projects against those of our peers is one of our main motivations for entering,” Mr Kempton says. “We believe it is very important for the construction industry to celebrate its success, and the RMB Commercial Project Awards is the best way to do that. “Since winning this award we have enjoyed a higher national profile, and winning the top accolade twice has measurably assisted in the growth of our company.”

Naylor Love hopes to enter the 2007 competition and once again earn the respect of their peers and the public. In the meantime, a new group of students will enjoy the fruits of their labour at Columba College.