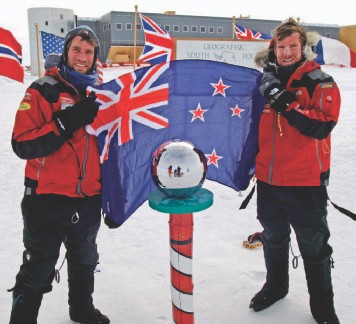 Architectural Profiles Ltd (APL) saw an early end to its polar expedition sponsorship when Kiwi trekkers Kevin Biggar and Jamie Fitzgerald were forced to end their Antarctic journey at the half way stage.

The Thermal Heart polar expedition, named after APL’s forthcoming thermally efficient suite of windows and doors, ended in early January when the men reached the South Pole in near record time.

They were forced to abandon the return journey back to the coast because of injury.

Jamie developed severe hamstring strain over the latter stages of their arduous manhaul and the two brought the expedition to an early conclusion on medical advice.

Their 52 days of trekking made them this season’s fastest unsupported manhaul to the pole (adjusted for start point) and the second fastest ever.

They might have rewritten the record books if their sleds had not been weighed down by provisions carried for the return journey.

Some other trekkers following the same route around the same time abandoned their journey before reaching the pole because of frostbite suffered in the severe weather conditions which were encountered.

Speaking in a Radio NZ interview on their return to Auckland, Mr Biggar said the pair had trained hard for the journey but did not imagine in their worst expectations that the haul would be as hard as it turned out.

During their particularly difficult first week the tow ropes to their heavy sleds had kept breaking, such was the difficulty encountered in pulling in the unexpectedly soft snow.

APL marketing manager Shane Walden says he is pleased with the visibility the expedition has given the Thermal Heart brand, and congratulated Kevin and Jamie on their hard earned achievement.

The Thermal Heart range will be launched in March through Altherm, First and Vantage window manufacturers.