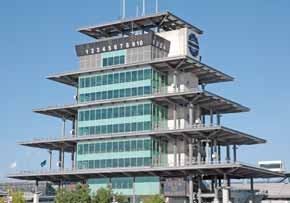 The facility is appropriately located in Speedway, Indiana, a separate city completely surrounded by Indianapolis. It originally covered some 320 acres but has now expanded to occupy 559 acres. Its claim to being the largest lies in the combined permanent seating and in-field spectator capacity of more than 400,000. Eat yer heart out Trevor Mallard.

Since August 19, 1909, a total of 222 automobile races have been held at the Speedway, won by 122 individual drivers. In 1975 the United States added it to the National Register of Historic Places, and in 1987 it was designated a National Historic Landmark. From beginnings . . .

The first race in August 1909 was a disaster brought about by the raceway surface being formed of crushed stone and tar. Cars crashed and caught fire. There were terrible injuries and deaths of drivers and spectators. The race was halted after five miles.

A safety initiative by Speedway president Carl G Fisher saw the track surface repaved with 3.2 million bricks, giving rise to the popular nickname “The Brickyard”. The Speedway reopened on May 30, 1911, with 80,000 spectators treated to the first 500 mile race, won at an average speed of 74.6 mph. The main two and a half mile oval track is relatively flat by American standards, but considered high-banked by Europeans.

Races became a regular feature at Indianapolis but were interrupted when America became involved in World War I and again for four years during World War II. By 1944 the Speedway had deteriorated badly and in 1945 it was sold and redeveloped. Since then Indy has continued to grow. Stands have been built and remodelled many times over. Suites and museums have been added and, last but not least, a full Grand Prix track has been constructed in the in-field.

In 1998 Formula One returned to the United States for the first time since 1991 with the first United States Grand Prix held at Indy in 2000. The 2001 race was attended by 185,000 fans, and was the first major international sporting event held in the States after 9/11.

The Grand Prix is held on the specially constructed in-field course and, unlike the outer oval, cars race in a clockwise direction. Michael Schumacher clearly enjoyed this track, having won there in 2000, 2003, 2004 and 2005.

In October 1961 the Indy oval track was re-laid completely in asphalt, apart from a symbolic three foot wide line of bricks at the start/finish line. The old Brickyard has now become a Yard of Bricks.

Those wanting to know more could try www.indianapolismotorspeedway.com.