Home Latest News Huge conference goes off without a hitch 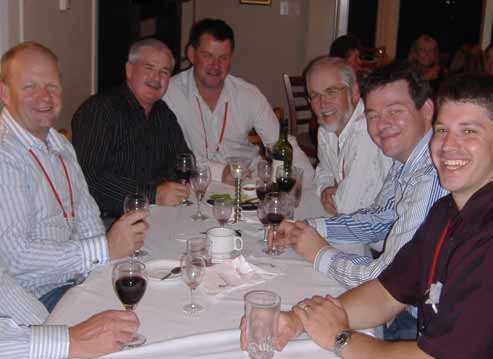 The four restaurants involved were the Waiau Estate, Gusto, Bach on Breakwater and Burgess House. All four venues entered into the spirit of the event and ensured that the food and drink were ready when needed in what was a logistically tight evening.

Around 280 guests hopped onto buses which took them to their first designated venue, at which they had a few welcome drinks and a delicious main meal. By the end of the first session, everyone was enjoying themselves and one of the musicians even had a few couples up and dancing.

From there the guests hopped back on the bus to their second venue where they enjoyed a sumptuous dessert buffet. Fun on the buses included quizzes, helium balloons (and helium voices), music and one group was even treated to a trip to the lookout to see New Plymouth by night.

The guests at each of the four venues also had the opportunity to win a case of Villa Maria Reserve wines for building the tallest structure from a shoebox of odds and ends, including lollipop sticks, pipe cleaners, sellotape and blu tack — and quite a few used the box the game came in as well!

After that it was home James, or in to town to watch the rugby league after a great evening of food and entertainment. Carters would like to thank Laker House of Travel, the Taranaki Registered Master Builders Association, Carters New Plymouth branch staff and the four venues for their support to ensure the night went off without a hitch.