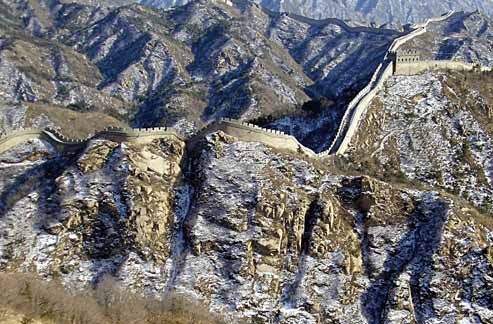 The Great Wall of China is the world’s longest man-made structure. It runs for over 6350km more or less along the border between northern China and Inner Mongolia. It is a composite fortification built to keep out raids from northern tribes.

There have been five major walls. The first four were constructed during the Qin (208 BC), Han (1st century BC), Sui (7th century AD) and Five Kingdoms (1138-1198 AD) Dynasties. These consisted of rammed earth with watch towers built at regular intervals. Essentially, they were little more than frontier demarcations rather like Offa’s Dyke (Building Today April 2004). All have largely vanished.

The wall visited by today’s tourists was largely built during the Ming Dynasty. Work started about 1368, continuing to 1640. Most building occurred after 1560 when the Mongols were proving particularly aggressive.

This last wall was built on a far grander scale than the earlier efforts. It used longer lasting materials, drawing on those immediately available to each stretch of wall — for example, limestone near Beijing, granite and fired brick elsewhere.

Two parallel walls were built of stone or brick with earth and rubble rammed between, before being topped with stone slabs. Improvisation was the norm. In places, blocks were cemented with sticky rice and egg whites, and where substantial materials were scarce, dirt was rammed between rough wood secured by woven mats.

As in the earlier walls, defensive forts were placed at regular intervals, each with its own unique stairwell and entry to confuse attackers. Mind-boggling as the wall is, the reality is that over a million people died in its construction. It is sometimes known as the longest graveyard on Earth.

The wall lost its strategic value in 1644 when Mongolia’s Manchus bribed a Chinese general to open the gates of Shanhai Pass and allow their army through. Once the Manchu army had overwhelmed the Chinese, the Manchu territory to the north was amalgamated with former Ming China to the south to give us roughly the borders of modern China.

Today much of the wall is in a bad state. There is no Resource Management Act in China, and the wall’s stones have been quarried to provide building material for provincial roads and local homes.

Parts have been destroyed as later constructions have sprawled across it. Elsewhere, sections have been preserved and even reconstructed, but at least a third is gone for good, with another 20% badly eroded.

There is a popular perception that the wall is the sole man-made structure on Earth visible from outer space. Neil Armstrong is of the opinion this is an urban myth. It is certainly not visible from the Moon, and only one astronaut claims to have seen it with the unaided eye. All others Armstrong has spoken to have not.

However, with a good camera and false colour imaging it photographs well. Readers may wish to trace its course along the NASA image shown.