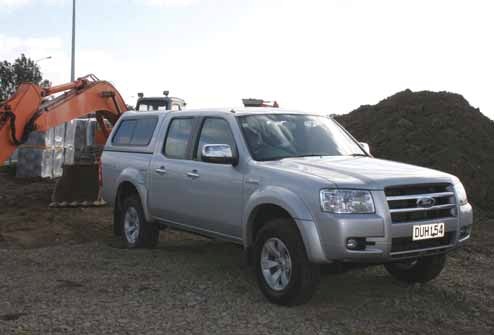 When car manufacturers design cars, or utes for that matter, it is very easy to get tangled up in wish lists. One of the more common items on a wish list, for utes anyway, is to make them into cars when it comes to driveability. Many manufacturers have gone to great lengths to achieve this, frequently diluting the functionality of the ute.

Ford is not guilty of this. The Ranger launched last year as the replacement for the long standing Courier has seen some improvements, but they certainly have not emasculated the backbone of the Ford working range.

Even with this — the top-of-the-tree 4×4, double-cabber in XLT specification — there is a sense and feeling of the Ford “Built Tough” philosophy, which has been the catch-cry of the Ranger’s predecessor.

That catch-cry has been reinforced, and the principle is alive and well in the Ranger. Having side that, you can’t shy away from adding elements of refinement to the specification levels.

There is more to the XLT spec than just pretty chrome and convenience. The XLT has safety advantages too, including driver and front passenger side and knee airbags, ABS brakes with electronic brake force distribution and remote central locking.

Additionally, the XLT 4×4 double cab is the only Ranger model blessed with an optional automatic transmission. Ford invested a great deal into securing this transmission, which offers a huge degree of what we call “elasticity” in the ratios. It creeps well in first gear and offers greater potential fuel savings thanks to the fifth cog at top gear.

And there is nothing tricky about the transmission. It is simple and strong, and brooks no nonsense with dicky Tiptronic-style pluses and minuses. Just drop it into Drive and go. Of course, if you want to go places where the tarmac isn’t, you have the selectable 4WD on a dial-up controller just behind the shifter.

It, too, is uncomplicated: 2WD, 4Hi and 4Lo — that’s it. Just dial up your traction requirement and take to the trees if that’s where you want to go. Your ground clearance, by the way, is 207mm or about 2mm more than you need to qualify as a true and proper 4×4.

The XLT 4×4 Ranger comes with the “hero” engine, namely a 3-litre common rail turbo diesel. This powerplant, with its 115kW at 3200rpm and 380Nm of torque at 1800rpm, is standard fare for the 4x4s. The 4x2s offer a 2.5-litre option in single cab derivatives, but the 3-litre is the real star of the Ranger show, offering smooth and responsive power delivery.

In fact, the engine is one element of the Ranger where some concessions to a car-like quality have been made. Yes, it is definitely a diesel, but there are enough diesel-powered passenger cars to compare it to. Heavy-duty engine

The 3-litre is undeniably a heavy-duty engine designed to work rather than purr, but it is far from unrefined under load, making the workhorse remarkably tractable in and around the city. Fuel consumption figures from Ford give the Ranger a 10.4-litre per 100km economy figure for the 3-litre auto and 9.2 litres per 100km for the 3-litre manual which, given the five person and cargo carrying ability of the ute, is pretty good economy especially on combined highway and urban cycle. City roads handled superbly

On that line of thinking, the Ranger handles city and suburban roads comfortably and capably. Even the 13.6 metre turning circle demonstrates Ranger’s city capabilities. But what of working on site?

Well, most buy utes with the intention of carrying stuff. And the Ranger double cab offers a 1530mm long, 1452mm wide and 457mm load tray. Our test vehicle came with a Fleetline canopy with standard side windows and a conventional two-catch rear door. It’s an option, not standard.

We mentioned earlier that this model is the top model in the Ranger line-up and, as such, it commands the highest price. At $53,990 even the top end Ranger auto is still looking healthy, given the level of specification, the ride quality and its capabilities.