Home Latest News The simple dignity that is Avebury 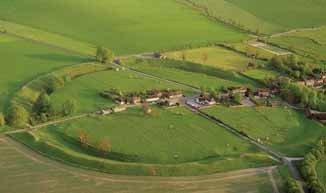 Avebury has always affected me deeply. I saw its standing stones first in 1973. It wasn’t their immensity, nor their simple grandeur — rather, the entire structure held an agelessness. Its stones claimed a voice that called across the millennia.

The stone circles of Avebury in Wiltshire, England, are the largest henge in the world, constructed more than 4500 years ago. Nearby stand the equally ancient structures of Silbury Hill, the Sanctuary and the West Kennet Long Barrow.

The main circle at Avebury occupies an area of some 11.5ha. It is 425m across and more than 1.5km around. Its perimeter was marked originally by 98 large, quartz sandstone or sarsen slabs averaging some 40 tonnes in weight. Unlike the trilithons of Stonehenge, the Avebury sarsens were not dressed.

Two smaller 100m circles, of 30 stones each, lie within the main ring that also once contained prominent large stone masses, one six metres high. The circles are enclosed by a substantial ditch and outer bank. The height from ditch bottom to bank top was originally 17 metres, with more than 200,000 tonnes of chalk and spoil excavated during the construction. Cultural vandals

Two great avenues of sarsens ran for more than 1.5km from the sou-western and sou-eastern entrances of the main ring. Only one remains today. All stones were dragged 3km from Marlborough Downs. They were then erected on edge by being sunk in the ground to depths between 30cm and 60cm. There they stood for 3800 years, more or less untouched.

But in the 14th Century, local Christian authorities began a systematic destruction as they attempted to stamp out lingering pagan beliefs. Stones were toppled, broken and buried. This vandalism ceased when one of the iconoclasts was crushed beneath a falling stone, his skeleton unearthed only in 1938.

In the 17th and 18th Centuries, the remaining stones were recognised as a valuable resource. Many were cracked with fire and water before being broken into smaller pieces used to construct much of the present village. The marvels of marmalade

In the 1920s and 30s, Dundee marmalade millionaire and part-time archaeologist Alexander Keiller happened upon Avebury. By now much the area was an overgrown waste, with the ditch being used as a local rubbish dump.

Keiller began acquiring properties occupying the site and undertook a systematic restoration of the entire complex. He cleared the ground, unearthed buried stones — some a metre down — and re-set them in their original holes. He marked missing stones with concrete pillars.

Today, the restored henge is truly a wonder to behold. Yet its purpose remains unknown. I get pleasure from simply wandering its perimeter and touching the ancient stones. And I like to reflect on the efforts of my ancestors who built with only stone tools, bone antler picks, woven baskets and their own sweat, blood and tears. These feelings were stirred anew in 2003 when I caught a BBC report of the finding of a buried 100 tonne sarsen close to the circle . . . and not a stone-age JCB in sight.