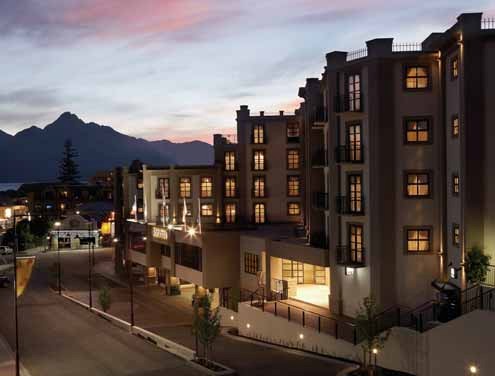 Queenstown is home to New Zealand’s very first Sofitel hotel. The boutique five-star hotel, which opened to much acclaim in 2006, was built by Amalgamated Builders 2001 Ltd, which won the top accolade in the Siesmic Tourism and Leisure Commercial Project category in the national RMB 2006 Commercial Project Awards, in association with PlaceMakers.

Located in the heart of the city, just 15 minutes’ drive from the airport and 20 minutes from Coronet Peak ski field, the luxury hotel is on a large site on an elevated boundary of the town centre.

The hotel has 82 luxury rooms and suites, all containing a double spa and most offering private balconies with either mountain or lake views. Considerable care was taken not to dominate the townscape with the sheer size and aesthetic feel of the hotel. The designer decided it should exert responsible influence over the environment, rather than be overbearing.

The over-arching design philosophy was for the building to sit comfortably in its environment and to look like it “had been there for years”.  Modern interpretations

The Sofitel Queenstown has simple modern interpretations of details found in some of Queenstown’s heritage buildings, such as the portal column detail creating relief on the large external elevations, high level “eyebrows”, Juliette balconies and their subtle cast branding logos.

Amalgamated Builders understood its client’s need to deliver a guest experience equal to any other contemporary Sofitel Hotel. Consequently, there is emphasis on detail to enhance the guests’ experience.

The hotel’s public spaces are relatively small, in keeping with the hotel’s boutique vibe. The true experience is in one of the guest rooms, with classic style and thoughtful accoutrements such as spa baths, audio visual systems, heated floors, and possum fur throws.

The finishes are of a quality that is expected in such a property, but not overdone. Carpets are wool, and in feature areas have been especially designed and commissioned.

There is some scope for the extravagant — as expressed in the men’s public toilets  — and rather than a traditional pond and obligatory fountain, the hotel has a stunning linear water sculpture.

The competition judges were very impressed with the quality workmanship of Amalgamated Builders and the attention to detail. “Only the finest materials and finishings were used in this luxurious building. “The contractor’s ability to bring the many facets of this project together highlights their skill, and has resulted in a trend-setting building that will impress for years to come. “The builder is to be commended.”