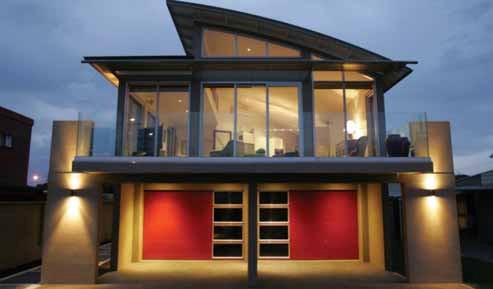 Kath’s house won not only a Gold Award, but also the Bathroom Award and Future Proofing Award at the Association’s 17th House of the Year competition recently. She says after a 15-year association with the competition, it was an eye opener to be on the other side of the fence.

“I wanted to know our house was good enough — it took a lot of soul searching to enter. “It’s a huge thing to do, to put your house on public display and allow photos to be taken of it. I never realised before how stressful it is,” she says.

This is the first, and she vows, the last house that Kath built. Gisborne architect Graeme Nicoll translated her many ideas into a plan, and Kath put her 1993 qualification in bathroom and kitchen design to good use.

The house is also fully accessible for the disabled. “Having spent time in a wheelchair myself, I know how difficult it can be and exactly what you need to do to make the house wheelchair-friendly,” she says. Kim Currie of Currie Construction built the house, with Kath supervising the construction.

“It was an amazing, unbelievable, wonderful experience, the things I had to do and the things I learnt — which is why I appreciate the awards all the more now,” she says. With its simple, minimalist decoration and landscaping, the house has a calm, restful ambience, and “is really lovely to live in”.

For Kath, the trio of awards is a highlight in a long career in the construction industry which commenced when she completed a New Zealand Certificate in Engineering upon leaving school.

With the ink barely dry on her papers, she joined the Ministry of Works’ draughting office. By 1980 when she put her career on hold to care for her young family, she had been running the ministry’s Gisborne architectural office for three years.

Some time later Kath lost her husband. When she joined the workforce again in the late 80s, it suited the single mother very well when her father, Lester Traue, made her an offer of employment in his business.

Mr Traue, a RMBF past president, is a qualified carpenter and joiner who spotted a good opportunity when aluminium came into general use in the 1960s. He established Traue Joinery 50 years ago, and the company became one of the country’s first aluminium franchises, Fisher Aluminium. Under Kath’s leadership as manager, Traue Joinery & Fisher Aluminium last year won a WANZ Commercial Aluminium Window Association of New Zealand Award.

Kath says her dad taught her how important involvement in the industry is. In 1985, she started a 22-year association with the RMBF when she became the manager of the Gisborne Association.

She served as secretary for 22 years, was pivotal in organising the 1993 RMBF conference in Gisborne, and is now on the branch’s executive. She says it was not always easy to be a woman in the construction sector, and she had to work extra hard to gain the impeccable reputation and respect she enjoys today. “But I also get extra rewards. I really enjoy every minute of it, because you learn something new every day in this industry.”

When she is not building a house, Kath’s other hobbies are swimming, needlecraft and reading crime novels. She is the treasurer and a past president of the Gisborne Business and Professional Women’s club.

Her advice for a happy life? “I’m a very single-minded person. When I want to do something, I just do it. I also believe it’s important to keep busy, and to take time to enjoy family life.” Kath is now realising a long-held ambition by enrolling for a postgraduate diploma in Construction Management.

She believes staff, lack of people and lack of incentive are the biggest challenges facing the New Zealand construction industry. “We do a lot of training and it takes a lot of money to train youngsters, and then you always run the risk that they leave. It would be fairer if the Government did more to share this financial risk with us,” she says.