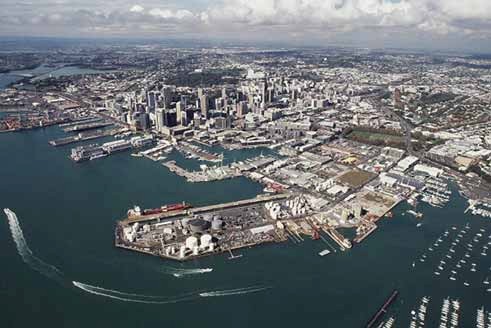 Auckland City, buoyed by the successful negotiations to develop Wynyard Point, is keen to proceed with developing the waterfront by converting the “finger wharves”, introducing new public spaces and making greater use of the harbour to transport Aucklanders.

City development general manager John Duthie says considerable work has been done on options for the next stage of the waterfront’s development.

Negotiations would have to take place with Ports of Auckland, which owns the wharves, to acquire them as the ports gradually move their operations east.

But in the meantime the council plans to invest $95m developing about 7.2ha of public space in the tank farm area (now called Wynyard Quarter).

A competition is being launched for the design of an iconic bridge to link the CBD to the quarter in time for the Rugby World Cup in 2011.

The city bought Westhaven Marina in 2004, facilitated the redevelopment of Britomart precinct and funded the Vector Arena as part of the concentrated drive to ensure a waterfront that “sits with pride” at the gateway to the city, harbour and Waitemata Gulf.

The council is keen to retain the character of Auckland and, in the future, Auckland’s harbour may be more like Sydney’s with lots of ferries for commuter traffic.

Ports of Auckland’s long-term strategy is to consolidate the ports operation to the east of the downtown area, as and when technology and operational needs allow the amount of land for activities to be reduced “without constraining future growth capacity and capabilities”.

The long-term use of Queens Wharf will be considered once work supply chain issues are complete.

Managing director Geoff Vazey says Ports of Auckland will continue to be a voice of reason in considerations as to the ultimate size of the port, and whether any commercial areas can be released in time to non-port use.

“It will be based on the real analysis, not the emotional charge,” he says.

The relevant parties have gained confidence through the successful negotiations to develop Wynyard Point which involve substantial asset ownership changes and a partnership approach.

Mr Duthie believes that process could be hastened if more space was made available to Ports of Auckland. For instance, the space needed for imported cars that currently clutter the downtown wharves could be reduced if they were relocated to an inland port.