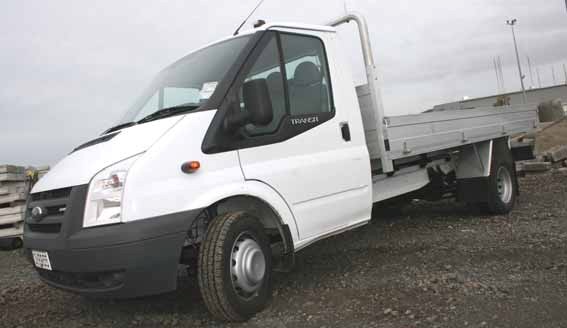 The Ford Transit has been a successful mainstay for the Blue Oval for more than 40 years in a diverse range of capacities.

In its current incarnation, Ford has made the everyday trades van that much more appealing for the everyday vehicle user, incorporating many of the features we are so used to seeing on conventional passenger cars.

At the same time, Transit has not lost any of its practical application, as witnessed by the range of vehicles available to us bearing the Transit badge.

There are plenty of options open to the Building Today reader as to the type of Transit best suited to specific business requirements.

By far the most versatile alternative would have to be the cab chassis. The cab chassis model provides the owner with the option of separately purchasing a tray which best suits his or her needs, whether that be a tipper unit, a flat deck with drop sides, steel alloy or wood floor, or even a semi-boxed unit.

Tray options can be discussed with Ford dealers or — as tradies — you can always source the trays independently.

Ford’s demonstrator cab chassis is fitted with a drop side flat deck sourced from a New Zealand supplier, but the tray — while it adds to the appeal of the cab chassis as a load-lugger — is not the real power behind the workhorse ability of the Transit.

This characteristic is inherent to Transits and, of course, the engines. Transit is now equipped as standard with a Euro IV-compliant, 2.4 litre turbo-charged diesel engine.

These engines are the end result of Ford’s ongoing co-operation with the Peugeot Citroen PSA group, widely recognised as having leading diesel engine technology.

However, we all know the real measure of the make is the torque. In the case of the Transit, there’s 375Nm of torque available from just 2000rpm, which gives Ford’s commercial kingpin all the pulling power it needs.

And one of the more significant improvements for the latest incarnation of the Transit is the inclusion of a new six-speed manual transmission — standard across the long wheel base range.

Is this just frippery? Not in the least. The six-speed gives much greater flexibility which is, after all, what the Transit has built its name on.

In addition, the six-speed is beneficial when it comes to fuel consumption, though with a modern diesel engine, good economy is a foregone assumption. For the record, the Transit returns 8.7 litres per 100km.

There have been other inclusions of course, making the Transit a worthy consideration for those looking to get into a new vehicle.

Anti-lock brakes are one such inclusion. ABS has been a significant factor in vehicle safety for some time now, and on a vehicle like the flat deck Transit, where changing payloads are a day-to-day occurrence, ABS is an especially important consideration.

Transit’s cabin has been revamped with modern ergo-dynamics in mind. Providing seating for three, the Transit seats offer individual headrests, recognition of the fact that the Transit cabin is likely to carry more than just a driver, and the occasional passenger.

For that reason, while Ford includes a driver airbag as standard, passenger airbag is an option as are power windows and mirrors. This serves to keep the initial buy cost down.
The other significant addition to the Transit’s cabin is the excessive amount of storage space.

Places for A4 folders, 2-litre drink bottles, additional gloveboxes and much more besides — the Transit cab has it all.

As far as the actual driving is concerned, the Transit is certainly city-friendly. The gearing ratios seem ideally suited for trucking around the city, though some might find first gear a little quick to bite.

There’s no issues with the seating for three either. With the repositioned gear lever in the centre of the dash, there’s plenty of knee space for all, and the car-conventional handbrake on the left of the driver’s seat is a much better proposition than the push me-pull you handbrakes of days past.

The Transit doesn’t seem to be afflicted by large loads either. The 2.4 litre turbo diesel is a winner of an engine which, thanks to Ford’s attention to noise, vibration and harshness reduction, is a quiet unit on par with many modern passenger car diesels.

Visibility is excellent, especially to the rear, with a split mirror to keep an eye on kerbs and other low objects.

Even for the non-commercial driver, it’s easy enough to reverse the Transit on the rear exterior mirrors alone.

However, this last comment does not indicate that Ford is going backwards with the Transit. Far from it.

Transit is obviously still moving forward, even after 40 years, and it’s helping builders and tradespeople alike move their businesses “Ford” as well.

The recommended retail price for the Transit cab chassis starts at $48,090.