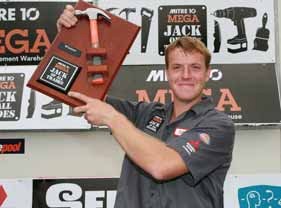 Timaru builder James Williamson has won the title of New Zealand’s best all round tradie and $100,000 of prizes in the final of the eight-part Mitre 10 MEGA Jack of All Trades TV series.

From more than 100 entries, two Island heats and a fiercely fought showdown of New Zealand’s top eight tradies, Mr Williamson went on to win the ultimate bragging rights as New Zealand’s best all round tradie.

But it was a tightly contested competition, with only three points separating him and runner-up, Hawkes Bay builder Warwick Beckett.

Mr Williamson, 28, was a strong contender from the start of the competition, winning the South Island final and then demolishing his opposition, Porirua builder Dave Mclean, in the first Jack of All Trades TV episode, with his win making him the first competitor to qualify for the finals.

When competing in the finals Mr Williamson says he always checked to see how each challenge was weighted. With points awarded for quality and accuracy of workmanship, adherence to safety requirements, speed, organisational skills, creativity and innovation in construction, he says it was often a fine line to get the right balance between speed and quality.

“The whole competition was fun,” he says. “I would do it again tomorrow!”

Mr Williamson also commented that as well as giving the public some insight into the diverse range of skills a builder needs, the event gives tradies something to aspire to.

“I’ve got a young guy working for me who has got his sights set on entering in a couple of years. I reckon that’s great.”

Mr Williamson walks away with $100,000 worth of prizes, including a brand new Mitsubishi Triton Ute, an enormous tool kit from Mitre 10, clothes from Dickies and a number of other great prize packs.

With a father who has been building for 40 odd years, Mr Williamson says he was raised with the mentality that if you haven’t got it, give it a go and build it. “Go out there, grab it and give it a crack!” he says.

He certainly has many projects under his belt, including working with his father on everything from beach buggies to building their own house, and a 60 foot paddle steamer-type boat capable of holding 100 people.

Described by his friends as “a genuine Jack of all Trades”, Mr Williamson has certainly lived up to his reputation.