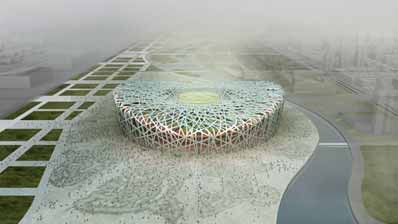 
Its image has appeared in newspapers and on television for some years now. Pictures have been seen of its on-again off-again construction.

But for all that, we know relatively little about Beijing’s new National Stadium beyond the fact that it is as innovative as it is amazing. It sure will provide a most auspicious focal point for next year’s Summer Olympics.

It all started back in 2002 when the Chinese Government launched an international competition for a new national stadium to replace Guangdong Stadium as the main track and field venue, as well as the host for the opening and closing ceremonies.

All submissions proved highly original and innovative — have a quick butchers at www.urbanplanet.org/forums/lofiversion/index.php/t8839.html.

The original concept had been that of a simple woven basket. This evolved with the different structural elements of the final design converging in a grid-like appearance that resembles the interwoven twigs of a bird’s nest.

No distinction exists between facade and superstructure. The separate elements lend mutual support and synergy, with the final spatial effect being both novel and radical, yet simple and immediate.

Importantly, the structure provides all the requirements of a modern Olympic stadium yet succeeds in escaping that insistent sameness of many of today’s sports venues where terraced stands are dominated by large spans and digital screens.

The access concourse is akin to an arcade. It runs full circle around all stands and is, in effect, a covered urban space complete with restaurants and stores. Stairs access three tiers of the stands.

As all the athlete’s suites, restaurants, shops and rest rooms are self-contained units, there is no need for a solid, enclosed facade.

Rather, the spaces in the stadium’s structure are to be filled with inflated ETFE cushions for weather protection, in much the same way that birds use soft materials between twigs of their nests.

These cushions allow for natural ventilation of the stadium, an important aspect of the sustainable design.

Ground was broken in December 2003, with construction-proper starting in March 2004. It was abruptly halted in August 2004 when construction costs blew out.

It had been intended for this roof to also be stuffed with ETFE cushions to render the entire venue weatherproof. Construction recommenced at the beginning of 2005, with completion scheduled for some time this year.

The only figure on the final cost is the budgeted 3.5 billion yuan (approximately $NZ2 billion).