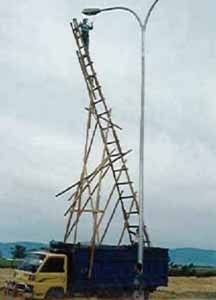 According to the results of a test conducted by Consumer magazine recently, seven ladders fall short of their specification claims.

It describes the test sample as ladders with an “A” configuration that has swing-up back legs to produce a straight ladder.

They are made of aluminium, and are approximately 1.8m high with six steps, and 3.2m in the fully open position.

The tests were done on domestic and serious DIY models with a load rating of 120kg to 180kg, keeping in mind “the upper end of the range would be getting into commercial/industrial models”.

The only ladders that passed all nine strength tests were the Ability AB10004 and Butlers Extendable in the “domestic” category, and the Bailey Comet 6 Plus and Gorilla DM0061 in the “industrial” category.

The most common failure in both categories was the twist test. Six ladders failed this test to varying degrees — three by considerable and three by small margins.

The magazine published an article detailing its findings. However, not all ladder manufacturers agree with the conclusions in the article. Building Today magazine spoke to representatives of Alco, Warthog and Bailey ladders.

Two Alco ladders, the ACH6 and the AC6 models, were tested. Alco national sales and marketing manager Jon Gibson says his company is very disappointed in the test results. The AC6 and the ACH6 ladders marginally failed the twist test.

Personnel from this laboratory and the Department of Labour have been unable to fault the company’s testing methods and apparatus. In respect of Consumer’s tests, he says, “with the exception of the twist test, all other results concurred with our own records”.

“The Standard is very clear in this regard, describing these tests as compulsory when conducting any compliance testing of a ladder.

“Alco ladders meet or exceed all these tests as they apply to the particular model of ladder being tested. We do not subscribe to selective testing of certain criteria only as we believe this does not provide a true measure of compliance to the Standard.

“And we are 100% confident that our products meet the Standard in all respects,” he says.

Shane Wearmouth, marketing manager of Northland-based Easy Access, which produces the 180kg load-rated Warthog WHSE06 ladder, has some concerns, too. The magazine complemented many of the Warthog’s safety characteristics, but failed it on the cantilever test.

“For me the problem with this article is it didn’t compare apples with apples. Our ladder is unique in the market — it has the highest load rating. It was also the only one tested to 180kg,” Mr Wearmouth says.

“It failed the test, but at a 167kg load, only 13kg less than that required for a 180kg rating — a point far beyond the industry standard of 120kg, and far beyond what any other ladder was tested to or could achieve,” Mr Wearmouth says.

“In the meantime, we’ve identified there was a problem with a batch of faulty rivets and rectified the matter, successfully retesting it to a 180kg rating. And users need to know the ladder is safe.”

Bill Cosgrove, general manager of Brisbane-based Bailey, which produces Ability, Bailey and Sentinel ladders, says had the magazine asked, the various ladder manufacturers could have provided valuable input into the procedures that would still have resulted in fair, independent tests and a balanced report.

Citing the procedure for testing the Sentinel, which failed the twist test, Mr Cosgrove says the mechanical tests put extreme loads on the ladders.

“Yet one ladder per model was used for all tests, rather than two or three. The twist test was done towards the end so I’m not surprised at the poor results. However, I’ve never seen these results in our own tests, in-house or independent.”

Also, he was surprised at the variance in results between the corresponding Ability and Sentinel model ladders, which are exactly the same product, but branded differently.

He contests the article’s advice that the Ability AB10004 could be used double-sided even if not labelled for this purpose.

“We didn’t label it as such because it’s not meant to be used double-sided,” he says.

The report concludes that “based on these results it’s time for the Government to make the Standard for ladders mandatory”, a sentiment that has been expressed often by all major ladder manufacturers.