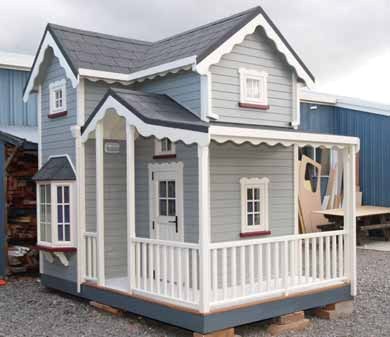 Wairarapa Registered Master Builders have come to the fore, in no small way, by constructing the fabulous Wendy House which is being raffled off with all proceeds going to the Child Cancer Foundation.

This charity was chosen as two local registered master builders have children suffering from cancer.

The idea was originally to enhance the local House of the Year awards programme and be a testament to the abilities of the RMBs in Wairarapa.

It was also decided that the construction should combine community participation with philanthropy.

The executive called for volunteers and the response was unanimous, with every member of the Association contributing time, material and/or financial support.

Retired RMB Merv Brown was designated project manager, so he dusted off the tool belt and got on with the job. Before long the house was not only taking shape but just about taking on a life of its own!

Building started in mid-May and was completed at the end of July. The house weighs just over two tonne and is 2.6m x 3.4m. It is two storeys, with a veranda on two sides and bay window on the lower level.

Inside features a wooden staircase leading to a mezzanine floor with enough head room for an adult to stand up in. It has a cupboard under the stairs, is fully insulated with Pink Batts, has a tiled roof with guttering and is rigged up for power in the same way you would for a caravan.

Apart from the fantastic local RMB support, a number of other local organisations came on board to support the project and many thanks go to Carters (timber), Darryl Silverwood Architects (design and plans), Nebulite (windows and doors), Watermart (roofing), Phil Carman Spray Painters (many hours delivering the colour scheme), Laser Electrical (power connection), McKenzie Flooring (carpet), Majestic Motors (provision of a Kia vehicle to tow the house), Loader Engineering (provided a crane to lift the house onto the trailer), and Masterton Mitre 10 (provided a PlayStation 2 as a second prize in the raffle).

Also, one local RMB, Brian Coley, was unavailable when the house was built so he’s volunteered his time to pick up and drop off the house every day so that it’s seen out and about in the district to help sell the raffle tickets.

“In short, the involvement in building the house from many of those within the community has been fantastic,” according to Wairarapa RMBA manager Pip Dalgliesh.

“The building is unique, and people are blown away with the result. One question was asked as to whether a Mother-in-Law would fit in it!”

If you’d like to support this fabulous initiative, raffle tickets are $5 each and can be purchased through Pip Dalgliesh on 06 378 8008 or email officesolutions@xtra.co.nz. The raffle closes on November 9, 2007.