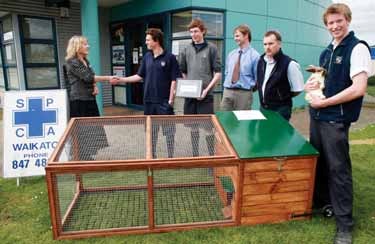 This year the BCITO in the Bay of Plenty region introduced BCITO Bus Trips, which were invitation-only events in Whakatane, Whitianga and Gisborne. Students were taken on a tour of local building projects to see first-hand what it’s like to be a part of the industry.

A popular feature of Building Careers Week was the school Build-Ability Challenge, in which high school students involved in the BCITO’s Elementary Construction Skills courses formed teams to construct a purpose-built rabbit hutch for local SPCA branches. This year, 18 teams from 16 schools throughout the country participated in the challenge.

Cambridge High School was named the 2007 Build-Ability Challenge champion, taking out top prize for their outstanding purpose-built rabbit hutch. Judges said the team presented an outstanding record of work with meticulous documentation of every step of the process, using photos, sketches and descriptions.

Taieri College in Mosgiel received a Highly Commended award for their entry which demonstrated an innovative design that was well recorded.

BCITO chief executive Ruma Karaitiana says the week has been one of the major drivers in boosting the uptake of building apprenticeships in the past couple of years.

“We’ve achieved some impressive growth in the number of apprentices training in the construction sector. But there’s still a way to go in order to future proof the industry’s demand for a highly skilled and professional workforce,” Mr Karaitiana says.

“There are more than 9500 apprentices currently training with the BCITO, and more than 1000 people will achieve a national certificate this year, which is fantastic for the industry and the general public knowing there are more qualified people working on our building sites.”