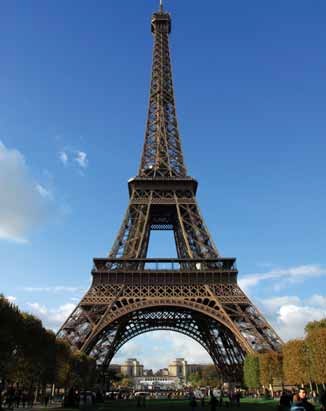 In 1887 Gustave Eiffel got the nod from the Paris authorities to begin construction of his tower. It was intended as no more than the spectacular entry arch for the Exposition Universelle, a kinda world’s fair marking the centenary of the French Revolution.

Eiffel had offered his novel design to Barcelona to grace their Universal Exposition of 1888. The Spaniards took just one look at the plans and said, “No way, José.” It was too way-out. There was no precedent.

And so Eiffel offered it to the French. Even they were not all that enthusiastic, and a permit was issued to allow the structure to stand just 20 years. It had to be built to allow for easy demolition in 1909.

Eiffel’s chief engineers, Emile Nouguier and Maurice Koechlin, had the idea for a very tall tower designed as a large pylon, consisting of four columns of lattice girders, separated at the base but meeting at the top.

The company simply extended the principle they had perfected and patented for bridge supports to allow the symbolic 1000 feet to be achieved.

All individual pieces were forged in Eiffel’s factory outside Paris. Each was then used to prefabricate larger forms of about five metres across. On the site, blots were replaced with heated rivets to ensure a tight fit.

The assembly used wooden scaffolding and small steam cranes mounted onto the tower. The greatest difficulty came in erecting and bonding the four main pillars at the first floor. These were raised at an angle from their 80m-spaced bases, and supported so as to meet with millimetre precision on 50 metres.

OSH would have been impressed. Despite the tower being an open-frame structure with only a couple of intermediate platforms, only one man died in the building, thanks to Eiffel’s use of movable stagings, guard rails and screens.

As the tower rose and came to dominate the Paris skyline, it produced strong reactions in the populace. Its shape and style were unlike anything seen before.

The critics regarded it as an unacceptable eyesore. Some of the more articulate insults included:

a carcass waiting to be fleshed out with freestone or brick,

a funnel-shaped grill, and

Novelist Guy de Maupassant despised it long and loathingly. When asked why he later lunched in its restaurant every day, he replied that it was the one place in Paris where he couldn’t see it.

The curvature of its uprights blew many a French mind. Their shape was prescribed mathematically as offering the least possible wind resistance.

Construction took just five months for the foundations and 21 months to finish assembling the metal pieces. The tower was inaugurated on March 31, 1889, and opened on May 6 of that year.

Today it still stands, albeit without a permit! It is the most recognisable and most visited icon in the world.

And it was saved from demolition by the arrival of new-fangled wireless communication. The French found a need for a tall aerial, and the tower’s 300 metre height proved ideal.
No doubt Rugby World Cup games are being broadcast from it now.

Base: Square with 125m sides


Monsieur Eiffel’s tower has starred in numerous movies, including 007’s pursuit of May Day up the Eiffel and her parachuting off it from a height of 200 metres — a film chase to savour.
Other notable films include:

And, of course, not forgetting Sex in the City — at least once!