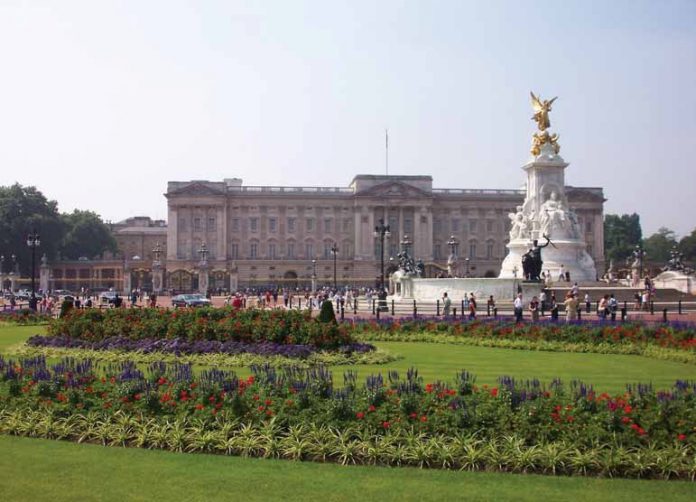 
The building we know today as Buckingham Palace started life as a largish townhouse designed and built by William Winde for the first Duke of Buckingham and Normanby back in 1703.

In 1762 King George III purchased it as a private retreat for Queen Charlotte. It became the official royal home of the British monarch when Queen Vic ascended to the throne in 1837.

Although the ceremonial State Rooms bedazzled visitors with their gilt opulence, the living quarters were utterly inadequate. The chimneys smoked so badly such that fires could not be lit, and for much of the year the court froze. Ventilation was poor and the interior stank. When gas lamps were finally installed, the gas accumulated in the lower floors.

Prince Albert turned up in 1840. He was appalled by what he found and promptly set about reorganising the entire household and rectifying the building’s many defects.

By 1847 the palace had become too small for the court and the growing royal family. Architect Edward Blore was called-in and built the present, central, enclosed quadrangle. The ballroom wing and a further suite of state rooms were added later by a student of John Nash’s, Sir James Pennethorne.

The large east wing that faces The Mall is the public face of Buckingham Palace. It contains the balcony from which the Royal Family acknowledge the crowds as they will at the Diamond Wedding celebrations. What the Queen’s subjects see today is the last major structural change that took place in 1913 when Sir Aston Webb reworked Edward Blore’s 1850 East Front façade. The new Portland stone frontage was designed to provide a backdrop to the Victoria Memorial outside the main gates.

During World War I the Palace escaped unscathed. The more valuable contents were evacuated to Windsor, although the Royal family remained in residence. King George V was persuaded to make a public and ostentatious show of locking his wine cellars and refraining from alcohol for the duration.

The object was to set an example to the booze-ridden lower classes. The King lost it when he discovered the pubs would stay open so his subjects could drink up large while his palace remained dry.

World War II saw the Palace bombed no less than seven times. It was a deliberate target, its destruction intended to demoralise the nation.

The most serious damage occurred when a bomb fell in the quadrangle while King George VI and Queen Elizabeth were at home. Many windows were blown in and the Palace chapel destroyed, whereupon, the Queen is believed to have famously declared, “I’m glad we have been bombed. Now I can look the East End in the face.”

Inside the building many of the early 19th century interior designs survive. These include the widespread use of brightly coloured scagliola and blue and pink lapis. Some smaller reception rooms are furnished in the Chinese regency style with furniture and fittings plundered from the Royal Pavilion at Brighton.

King Edward VII wished to make the building the focal point of his British Empire and provide a setting for entertaining on a grand scale. He oversaw a partial redecoration in belle epoque cream and gold. Critics feel he went a tad overboard. His heavy-handed style fails to complement Nash’s original, more subtle work. However, it is all still there, 100 years down the track.

Today, Buckingham Palace is the weekday home of the Queen and Prince Philip, and also the London residence of the Duke of York and the Earl and Countess of Wessex. The Palace houses the offices of the Royal Household and is the workplace of 450 people.

The State Rooms are currently used regularly by Queen Elizabeth II and members of the royal family for official and state entertaining. More than 50,000 people visit each year as guests.
Those Palace Garden Parties are conducted in the largest private garden in London, originally landscaped by Capability Brown, but redesigned by William Aiton and John Nash. The artificial lake was completed in 1828, with its water supplied from the Serpentine.

And, in case you were wondering, the Palace is no longer the monarch’s private property. Both Windsor Castle and Buckingham Palace along with their art collections, furnishings, fittings and other artefacts, many by Fabergé, belong to the nation.

For Britain, the wedding of Princess Elizabeth and the Duke of Edinburgh on November 20, 1947, provided a most welcome relief after the years of war. The nation may have been exhausted but their hearts went out to the Royal bridal couple. The wedding was eagerly anticipated by tabloids and broadsheets alike. She was heiress-presumptive to Britain’s throne. He came of the Greek royal house of Schleswig-Holstein-Sonderburg-Glücksburg and the Danish royal line of Oldenburg.

Yet it would seem that families everywhere have their Little Moments, whether they be titled or common as muck. This marriage was by no means uncontroversial. For starters, Philip was Greek Orthodox. He lacked financial resources. And his sisters had married Nazi sympathisers. Some royal watchers suspected that Elizabeth’s mum wasn’t all that keen on her prospective son-in-law, yet what mother-of-the-bride has not felt this way at some time or other?

In the event, Philip cleaned up his act. He gave up his Greek Orthodox faith and became a good Anglican. He renounced his allegiance to the Hellenic Crown along with his Greek and Danish royal titles. He changed his surname to an anglicised version of his mother’s family name, Battenburg. And he found time to become a naturalised British subject.

The war, however, was still too fresh in Britain’s memory for any of Philip’s German rellies to get an invite to the big occasion. This included his three sisters and their aristocratic German
husbands. An exception was made for his mum who had had the good sense to be born at Windsor of parents who had renounced their German titles. The bride’s aunt also proved difficult. She refused to attend when her brother, the Duke of Windsor, failed to get an invite.