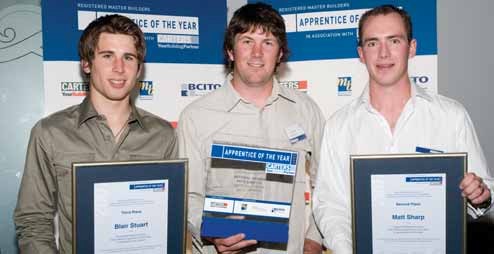 Rhys, 25, from National Park, won the national award ahead of nine other regional winners from throughout the country at an event in Wellington.

National finalists were interviewed by a national judging panel, made up of representatives from the Registered Master Builders Federation (RMBF), Carters, the Building and Construction Industry Training Organisation (BCITO) and the Department of Building and Housing (DBH).

“The judging day went pretty well,” Rhys says. “I just tried my best. My interview was in the morning, so I was able to relax for the rest of the day. It was pretty casual, and not too intimidating.”

Chief national judge Ian Shepherd, from the BCITO, says Rhys’ passion for the construction industry and his entrepreneurial vision for the future made him stand out from the other finalists.

“Rhys has a real passion for designing and building homes that are fully functional for disabled and elderly people. The combination of his technical skills, knowledge and character make him a model apprentice and a fitting national winner,” Mr Shepherd says.

RMBF chief executive Pieter Burghout is delighted with the success of this year’s awards.

“The awards were a great opportunity to celebrate the achievements of these apprentices and our future industry leaders,” Mr Burghout says.

During the two-day trip to the capital, the 10 national finalists were treated to a dinner hosted by the BCITO, a trip to the Carters frame and truss manufacturing plant in Upper Hutt, and morning tea with family, friends and employers at the Grand Hall at Parliament, hosted by Shane Jones, the Minister for Building and Construction, and representatives of DBH.

Mr Jones said he was “rapt” to see keen young Kiwis showing such enthusiasm to succeed in the construction industry.

“The competition shows we have talent spread all over the country, and I have a genuine feeling that as experienced builders move on our young apprentices will be able to step up to the plate.”

The winners were announced at an awards dinner at Icon Restaurant at Te Papa in Wellington on November 6, attended by more than 100 people, including Mr Jones, apprentices and their families, and key representatives of the construction industry.

The MC for the evening was celebrity builder John “Cocksy” Cocks, and ex-All Black Glen Osborne was guest speaker.

Rhys received a prize package which included a $5000 study grant from Carters, a trip for two to an Australasian trade show of his choice and associated travel package, a Stanley 51-piece builders apprentice kit and a Lufkin automatic laser level kit.


The Apprentice of the Year competition is a joint initiative between the RMBF, Carters, the BCITO and the DBH. It aims to recognise excellence among carpentry apprentices and raise awareness of the career opportunities in the construction industry.

The competition has undergone significant growth since its inception in 2004, with this year’s competition attracting a record 133 entrants vying for a national title for the first time.

This year was the second time the competition has been held in the Central North Island region, which extends from New Plymouth and Taumarunui, south to Levin, Dannevirke and the Tararua District.

Each of the regional winners from around the country received an Outward Bound leadership course worth $2500 and a study grant of $2000. Regional winners automatically became a national finalist in the competition, and were flown to Wellington with up to three guests for the first-ever national Apprentice of the Year event on November 5 and 6.

All national finalists received a prize pack which included Standards New Zealand Standards 3602, 3604 and 3920, education kits from the DBH, and branded merchandise from Carters and the BCITO.