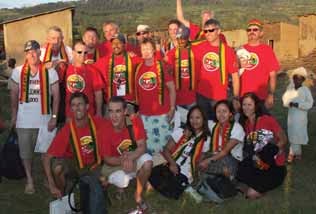 Marty van der Burg and his team have returned from their adventure to construct houses for families in Jima, Ethiopia.

The 18-strong team of Kiwis departed in early October to build houses for Habitat for Humanity, as previously reported in Building Today.

Landing in Addis Ababa, the team spent a couple of days acclimatising to an altitude equivalent to the summit of Mt Tongariro. While there they observed local women of all ages carrying their produce to market. Some of the team members tried having a go at carrying the load — one or two couldn’t even stand up!

Their visit to an orphanage, supported by the Auckland Ethiopian community, proved to be a very emotional time for the team. Thanks to Emirates allowing extra luggage free of charge, they were able to hand-deliver four suitcases of toys and clothes to the children.

Seeing a charity really working definitely restored the team’s faith in what is often thought of as a pointless endeavour.

Also while in Addis Ababa the team visited a Kiwi woman called Amanda Blewitt. Amanda has decided to dedicate her time to run an organisation called Design for Dignity where she works with marginalised communities in Ethiopia to assist them to be productive.

An architect by trade, Amanda creates designs whereby local people can make use of local products to create merchandise to on-sell and make a living for themselves.

Given that the average Ethiopian earns just US$100 a year, this gives an incredible boost to families who live in poverty that most of us can’t even begin to imagine.

An 11 hour bus ride saw the team arrive in Jima to a very emotionally charged welcome from the locals.

“The welcome we received was very moving,” Marty says. “I thought, ‘I finally got them here’, and it was fantastic to be surrounded by a group of Kiwis to share the experience. The team just wanted to get stuck in.”

After getting thumped 9-4 in a soccer match against the locals on the Sunday (and sustaining one or two injuries), the team ripped into the first week of the very labour-intensive business of building — Ethiopian style.

The 29 homes on the site were in various stages of completion, and a number of them need cladding. This consisted of mixing mud, water and straw with bare feet, rolling it into a ball and spreading it on the walls of the huts.

The team kicked off their boots and jumped straight in. Once the walls were rendered (in about a week) they were ready to be plastered.

The hut floors had to be dug out and filled with broken-up boulders carried from the roadside, then concreted. The floors inside the huts needed to be 300-500mm higher than outside due to flooding risk.

This was all done manually and, with help from the locals, Team Kiwi nailed, in one week, all the work that was expected to take two! Precedence had been set by other visiting teams to the area and, needless to say, they weren’t Kiwis!

It took a couple of days for the Kiwis to earn the respect of the local chippies, but once they realised the work ethic of the team was second to none, they ended up working very happily alongside each other.

Typically on these trips, the visitors take their day’s food from the hotel. What was on offer was not that great so the team decided to pool their resources and pay for local cuisine to be provided daily for everyone on the project — around 70 people.

This had never been done before, and everyone really appreciated the opportunity to become even more immersed in the local lifestyle.

Finding themselves way ahead of schedule, Team Kiwi ended up with the memorable task of building and digging three metre-deep long drop toilets.

The local spades were a bit gnarly and Team Kiwi found the going a bit tough. Luckily the locals stepped in and got stuck in with some amazing spade work, being well used to the substandard tools available. Once dug, a crude form of suspended floor was built and then a construction similar to the huts put up around the outside.

The hard work continued for Team Kiwi but, when the time came, no one wanted to leave. Team member Karyn Collins said “just the pleasure and thankfulness from the locals for being there made it all more than worthwhile. It was a joy”.

The time went too fast and it was over way too soon — at least they were given a chance to improve their footie skills and managed a 2-2 draw before leaving!

After all its hard work the team was rewarded with an enjoyable R & R trip, taking in the beauty of Lake Tana and the Blue Nile Falls in Bahir Dar, along with the surreal experience of Gondar and its regal stone castles.

The team had the chance to experience a more relaxed view of Ethiopia and some sights of the remarkable historical circuit. The Blue Nile Gorge was the highlight of a 15 hour bus trip into Bahir Dar.

Back in Addis Ababa before the team’s departure on November 1, a sad farewell was given to the staff of Habitat for Humanity Ethiopia. Many of the Ethiopian team had spent invaluable time assisting the team in Jima and had built lifelong relationships.

The team was incredibly grateful for the chance to experience what they had in Jima during the build, made possible by the Habitat for Humanity staff in Ethiopia.

Much was learnt about Ethiopia and its incredible beauty, and richness of the people. Many of the team are vowing to return so it’s a good thing Marty intends to do it all again in 2009!