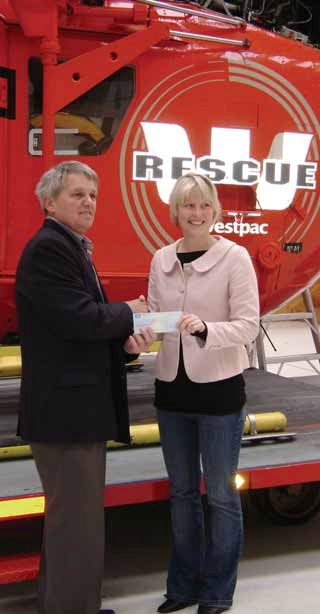 For a number of years, the Wellington Registered Master Builders Association (WRMBA) has made donations to a local charity. It has, in recent years, alternated between the Wellington Free Ambulance Service and Life Flight Trust. In 2007 the Association decided to double its donation and give both of these worthy causes $1000 each.

WRMBA president Graeme Sutton and manager Gerald Rixon visited both operations to make the donations, and were overwhelmed by the reception they received.

“We were surprised at the sheer size of both operations and the number of staff needed to run them,” Mr Rixon says. “We really appreciated the time they took to show us around and explain how things worked,” he says.

James Craw from the Wellington Free Ambulance took the guys around their operation which has been providing emergency care for the residents of the greater Wellington area since 1927, and assists around 40,000 patients every year.

It’s New Zealand’s only free metropolitan ambulance service, and costs around $13 million a year to run. With 75% of the budget being covered by contracts with the Ministry of Health and ACC, the other $3 million is raised through sponsorship, local council and Charitable Trust grants, donations, appeals and fundraising events.

Life Flight was a concept created by Peter Button back in 1968 as he watched the Wahine disaster unravelling in the entrance to Wellington Harbour. He decided there and then that there had to be a better way. He later became known as St Peter for his rescues.

The fleet includes the Westpac Rescue Helicopter and two Fairchild Metroliner fixed wing air ambulances. The workload on the Wellington-based plane alone increased 400% between 1998 and 2004 (236 to 954 missions). Life Flight is only partially funded by Government, and makes up the rest through sponsorships, grants, bequests, fundraising events, Life Flight merchandise and donations.

“Life Flight is thrilled with the fantastic support from the Wellington Registered Master Builders Association,” communications and events manager Anna Gilhooly says. “We hope that no master builder ever needs our services, but they can be rest assured that Life Flight will always have an around-the-clock air rescue and air ambulance service thanks to community support like this.”

The WRMBA feels the construction industry is one that is vulnerable to accidents, and is proud to support the two causes. The Association has also named the two organisations as the official charities for the Registered Master Builders 2008 Conference to be held in Wellington.

If you would like more information on the charities go to www.wellingtonfreeambulance.org.nz or www.lifeflight.org.nz.