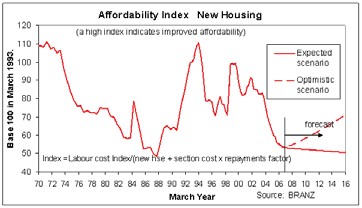 Increasing section prices have been the major factor in reducing housing affordability over the past decade, according to a recently released report from the BRANZ Group. The Changing Housing Need study undertaken by Ian Page, economics manager with BRANZ Ltd, and funded by Building Research, included an analysis of the impact of the key drivers of housing affordability.

”Home ownership has been declining and was down to 66.9% in the 2006 census. Tenure and new housing affordability are shown in the graph below which indicates downward trends from 1996 onwards.

The “expected” scenario indicates a flattening out of affordability, and is based on modest wage growth, lower rates of increase for construction and land costs, and a slight reduction in interest costs. With the “optimistic” scenario, wage growth is quite high while house and land price escalation is relatively low, and the interest rate for home lending (6% in 2016) is 3% below current rates.

“Should these factors come into play, housing affordability could improve. However, when we look at what factors have contributed to housing becoming less affordable over the past decade and, particularly, the past five years, we can conclude that relatively low wage increases and escalating land prices are the two most important factors. “These are followed by the cost of funding and then the cost of new house construction,” Mr Page says.

A copy of the report, Changing Housing Need can be downloaded from the BRANZ web site: see www.branz.co.nz/branzltd/bookshop/info.php?ask=free&idnum=1666. * The affordability index is a ratio of a wage index divided by a new house cost index and a financial factor index: • The wage component comprises all industries all occupations’ wages/salary, including overtime;

The financial factor is the annual capital recovery factor for a 20-year term, and uses the floating house mortgage rate.