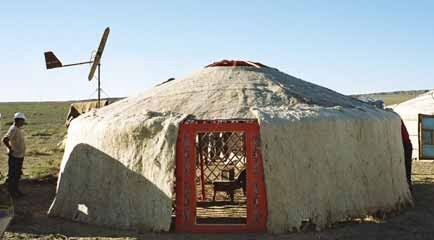 In Old Turkic, yurt is the homeland, the dwelling place. For the nomadic people living on the steppes of Central Asia, it described their portable, felt-covered, wood-framed homes that were — and still are — their principle dwelling places.  Getting it up

A yurt’s skeleton consists of a simple, circular, self-supporting wooden frame that includes: • lattice wall-sections,  • a door-frame,  • straight of curved roof poles that vary in size and weight, and • a crown supported by one or more columns. The framing timber is a precious commodity. No trees grow on the high Central Asian steppes, and the wood must be sourced through trade with people living in the valleys below. Once erected, the frame is covered with a wool felt that provides an insulation that breathes and keeps the yurt cool in summer but warm in winter.

In its turn, the felt is covered with animal skins, canvas or sun-covers. The whole is lashed together with ropes or ribbons encircling the walls, and is kept under compression by the weight of its covers that can be supplemented by a heavy weight hung from the roof centre. The entire structure is designed to be readily dismantled and carried to another site in the back of your ute which, today, has displaced the camels and yaks of yesteryear. Shangrak

The crown of the yurt, or shangrak, is symbolic of many Central Asian cultures. Among Kazakh traditionalists, a yurt is passed down through the generations. Like grandpa’s axe it can eventually have had three new heads and a dozen new handles, with lattice frames being replaced and felt coverings patched.

However, the shangrak is taonga. It was preserved intact with a family’s heritage proclaimed by the accumulated smoke and soot of home fires past. A stylised shangrak provides the central motif of modern Kyrgyzstan’s flag. Westie yurts

Ever since Marco Polo did his Big OE, western enthusiasts have promulgated the virtues of yurt-living. In most cases, today’s westie yurts are semi-permanent and employ hi-tech materials. Often they are engineered for extreme weather conditions. In North America, a yurt fad emerged in the swinging sixties, but today’s yurts bear little resemblance to the felt homes of the steppes.

Most are permanent structures and are typified by those provided for campers in some Canadian and United States parks. And being the US of A, there is, of course, even a Yurt Foundation. Modern European yurts are closer to their Mongolian counterparts, although adapted for the wetter climate with steeper roof profiles and contemporary waterproof coverings.

The design would seem to hold potential for that of the ultimate Kiwi summer bach. It is snug yet cool and highly portable. The barbie can be positioned under the crown. Resource consents aside, getting one up might provide a late summer project for any RMBF member with time on their hands.

You can order yurt plans from the Yurt Foundation.

Try www.yurtworks.co.uk or www.yurtinfo.org/yurtfoundation.php where you can even build a virtual yurt complete with skylight and deck.