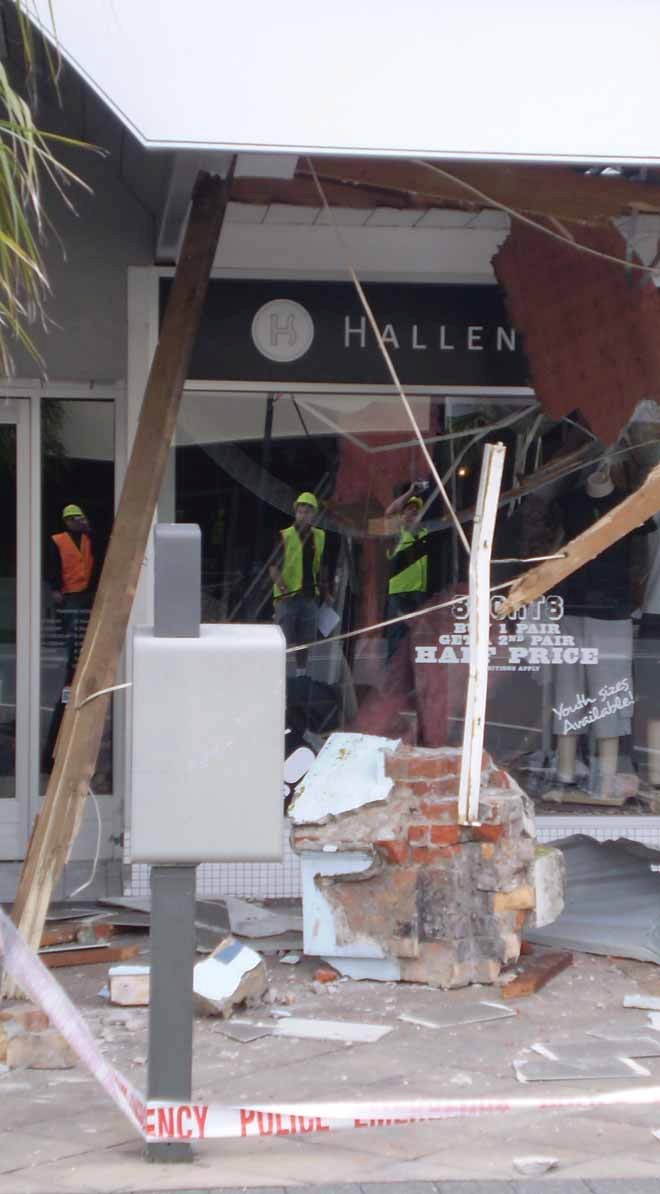 Usually, a typical summer’s evening in Gisborne would have seen the city streets filled with people out eating, drinking and, just before Christmas, doing some last-minute shopping. However, on that particular Thursday, a light rain was falling, keeping people indoors. Those drops of rain turned out to be a blessing in disguise, because once the quake hit, the brickwork from some of the town’s older facades came crashing down on to what should have been crowded pavements.

It turns out that Gisborne was also relatively “lucky”, because the earthquake was centred 50km offshore, 40km deep and relatively short. All these factors have prevented a major loss of life, which is great for the local community.

That said, the quake certainly did leave its mark on the town, with damage control and disaster repair continuing to keep Gisborne’s builders busy even now, and for many months to come.

Builders often come into their own in disaster situations like these. Not only do they work hard to help get people’s homes ready to live in and businesses operating again, they are also focused on getting the basic utilities back on line.

And many Registered Master Builders in Gisborne wasted no time in rolling up their sleeves and mucking in to get the town working again. Noel Holden, of City Construction, was called out to Hospital Hill, where the city’s water is stored. “Our first challenge was around the water supply. These huge concrete tanks are designed with a pressure valve to keep them from ripping open when the water is displaced,” Mr Holden says.

“Both the tanks that store the city’s water supply had the master board blow out. We needed to replace these immediately to keep the city’s water clean.” Once the water and power were sorted, it was down to work on the damaged homes and businesses.

“Most of our initial work putting commercial operations back in business was coming from people who own commercial buildings, and whom have worked with us before,” he says. “But on the ground we were dealing with the retailers, and the first step for them was getting the basics right, such as shoring up the roof and repairing things like the joinery — just to get their doors to open again.

“It’s really important to get the businesses back up and running as quickly as possible. The longer a business is closed, the likelihood of them staying closed increases. “We’ll be getting on with the major structural work a bit further down the track,” he says.

Before the major structural work begins, the full damage assessment process must be completed. A lot of the builders working in Gisborne have noted that the assessment process has been undertaken by independent contractors from around the country and Australia, not from Gisborne.

The reason for this is to maximise the building owner’s confidence that they are getting genuinely independent advice on how to rebuild. Disasters such as this tend to result in improvements to building design. Former Registered Master Builders Association president Francis Yates has spotted some interesting trends developing in the aftermath of this earthquake.

“While I can assure you I held my beer as steady as a rock and didn’t spill a drop through the entire event, we have noted a few weak links,” Mr Yates says. “One example is the metal angle bracing used in residential building has folded like wire where it is running in the same direction as the quake — east/west. “A solution to this could mean using a ply brace instead. Another interesting development is that we need to watch the nut on the top of hot water cylinders. These tend to be loosened, resulting in water damage during a quake.

“It’s interesting from a builder’s point of view to find out what happens after a quake. There’s a lot we can learn. We have lost around a thousand brick chimneys, particularly in 40 to 50-year-old homes where precast sections have been used. “We have been advising Don Clarke (ex-Gisborne mayor and disaster relief coordinator for Cyclone Bola and this earthquake) about why it is going to be so difficult to replace these before winter. Basically it comes down to a short supply of precast chimneys, and brickies to do the work.”

Ultimately, these situations are about learning what to do in future and focusing on building a coordinated response. Peter Steven, who has run a family building business in Gisborne for 45 years, puts the role of builders in perspective.

“Katrina Duncan at Gisborne Registered Master Builders helped coordinate the response among Gisborne builders and, overall, we have done a good job,” Mr Steven says. “As an Association, we have an active role in delivering the best assistance we can to the community in these situations.

“In our firm, the Christmas party and sharing of stories was followed up by getting a crew together to work on standby over the break. It’s just about people in a small town going out of their way to help others in a time when they need it,” he says.