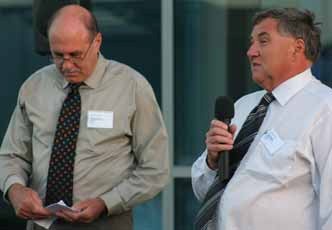 Two RMBF functions I attended in February gave me a real buzz. One revolved around a local association, the other around a long-standing member company. One of these events was the official opening of Project Hope (the Bay of Plenty Energy Cancer Centre) in Whakatane. My wife Denise and I, along with new RMBF membership services manager Lauren King, were very proud to attend. I recall the passion of our members for this project when I visited the association in August last year.

I was pleased to be asked to speak on behalf of Master Builders and acknowledge their efforts which resulted in saving the fundraising committee many thousands of dollars. Without this the project would probably still be in the fundraising stage.

Whakatane Association members (under the guidance of president John Pullar) have done themselves proud, and raised the profile of their organisation to new heights. John tried dammed hard to shun the limelight, but it’s very fitting indeed to have the main treatment lounge in the building named after him and his wife Mary. Well done to you all.

This project will be covered in more detail in the next issue of Building Today. I was also honoured to be asked to say a few words on behalf of the RMBF at the opening of Foster Construction Ltd’s new office and warehouse in Hamilton. This coincided with a 50-year celebration of Foster Construction.

Foster is a building company success story — a company that not only talks the talk, but walks the walk. It is a long standing and very active member of the RMBF. Many people, including me personally, owe a huge debt of gratitude to members of this company for the free knowledge they pass on for the benefit of all.

David Beard (a previous company director) held the purse strings of the Waikato Association during very difficult times in the late 1990s when restructuring was in full flight, and he has a lot to be thanked for.

David has also been an active member of the Federation’s Commercial and Contracts Committee for more than 10 years. During this time he, along with Hawkins Construction’s Robert Finley, established a joint contracts committee with the New Zealand Institute of Architects, and was also a driving force in the introduction of the MasterSpec Warranty Agreement.

Waikato Association life member and RMBF past president Graeme Mallet is also a previous Foster Construction director. Graham still plays an integral part in various aspects of our organisation and industry as a whole.

With guys like these and a company like Fosters involved in the RMBF, you realise that we get out far more than we perhaps put in by being involved in a membership organisation. It was great being able to acknowledge their input at the opening — well done Foster Construction Ltd.

I truly believe that the power of associations comes from what individuals bring to it. Fosters, through David and Graham, and the Whakatane Association, through John, have brought a great deal of mana to Registered Master Builders through their contributions.

On behalf of the RMBF I say “thank you” for all your hard efforts on our’s and the industry’s behalf.