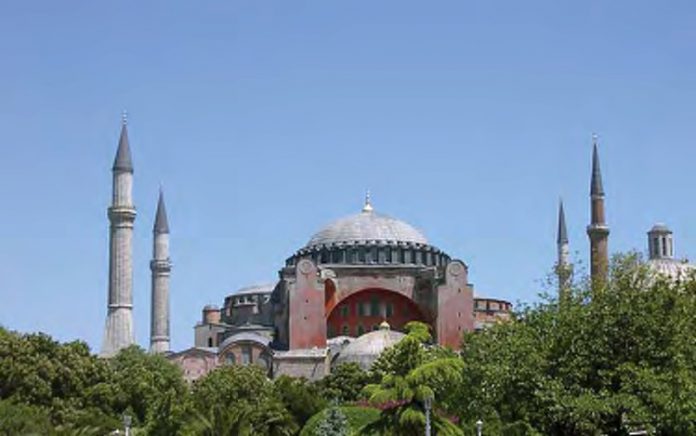 When the votes were in for the New Seven Wonders of the World, Istanbul’s Hagia Sophia failed to figure among the magnificent seven, although it had made the final top 20. In a BBC discussion of the winners, a leading architectural historian described the Hagia Sophia as the most beautiful building in the world, the epitome of Byzantine architecture. Certainly, from an architectural or engineering point of view it sure beat the pants off anything Europe would construct for the next 1000 years. Its influence on architecture throughout

Europe and the Middle East, in both Christendom and Islam, would be profound. Yet the great unwashed ignored it in the final vote. The main substance of the present building was constructed between 532 and 537 on the orders of Emperor Justinian I. His aim was to build something far larger and more majestic than any other Christian place of worship. The architects were physicist Isidore of Miletus and mathematician Anthemius of Tralles.

Material for the new building was sourced from throughout the empire: Hellenistic columns from the Temple of Artemis; porphyry from Egypt; green marble from Thessaly; black stone from the Bosphorus; and gold mosaics from Syria.

More than 10,000 people worked on the construction. The structure would be the most advanced and ambitious the world would see for a millennium. The new church was finally inaugurated on 27 December 537. So rich was the building’s art and so splendid its architecture that Justinian boasted, “Solomon, I have surpassed thee.” Thanks to modern Turkey’s first Turkish president, and Gallipoli veteran, Mustafa Kemal Atatürk, today’s visitors can behold the essential glory of the building as it was in 537.

Central is the vast nave covered by a massive dome, 31.24m across and 55.6m high, complete with an unbroken arcade of 40 arched windows that flood the interior with light. The dome is borne on four pendentives, never before used to support such a structure. These solved the problem of setting the circular dome on its rectangular base. Scalloped ribs extend from the dome’s apex to its base, allowing the weight to flow between the windows, down the pendentives, through four giant piers and, ultimately, to the foundation.

As a consequence, the dome appears to float upon four great arches, the effect heightened by the light from those 40 windows reflecting throughout the nave.  The problems presented by the weight of the dome were aggravated in the construction of the walls. The bricklayers used more mortar than brick and failed to let the mortar cure before beginning the next layer.

Construction of the dome began atop these walls with the mortar still wet, and the dome’s weight caused the walls to bow outward. Hagia Sophia would remain the largest cathedral in the world until that in Seville was completed 1000 years later. Throughout these years it would be the seat of the Orthodox Patriarch of Constantinople (now known as Istanbul) and the religious focus of the Orthodox Byzantine Empire.

But it came complete with a mess of problems. For starters, the building suffered bad earthquakes in 553, 557, 558, 869 and 989. The main dome and half domes cracked regularly, with the main dome collapsing totally in 558 and again in 989.

Repairs and restoration employed lighter materials, and the dome’s weight was better spread through the walls.  The building suffered badly at the hands of the successive waves of crusaders, and by 1261 it was a mess. Another earthquake in 1344 saw parts of the building collapse. The Ottoman Turks conquered Constantinople in 1453, and Sultan Mehmed II found himself with a totally trashed building. However, he appreciated its essential majesty and ordered immediate restoration and conversion into a mosque.

Christian mosaics were plastered over and specific Islamic features added, including four minarets, the mihrab (the orientation point for Muslims at prayer) and minbar (pulpit). On completion, Hagia Sophia became the model for many Ottoman mosques for the next 500 years.

It was the Ottomans who effectively saved the building. Importantly, the brilliant architect Sinan, arguably the world’s first earthquake engineer, substantially strengthened the basic structure and few earthquakes have affected it since.

Large-scale restoration occurred in 1739 and between 1847 and 1849. Atatürk’s final transformation in 1935 converted Hagia Sophia into a museum. For the first time in centuries the marble floor decorations were revealed and the plaster covering thousand year-old mosaics removed by restorers. Today’s visitors can behold the full ignorance of the New 7 Wonders’ voters.