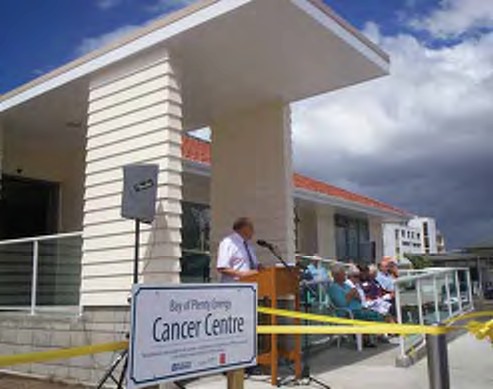 According to local farmer and ex Whakatane mayor Colin Hammond, the chaps from the local Registered Master Builders Association are a bunch of legends.

Mr Hammond is chairman of Project Hope, a fundraising committee that has spent the better part of the past three years working towards building a dedicated oncology clinic at Whakatane Hospital.

A lot of the Whakatane-based registered master builder members pitched in to help build the new ward. Between them, they were able to help save the project several hundred thousand dollars.

Project Hope came about because Mr Hammond, in his capacity as mayor, had heard that the Bay Health Foundation was looking to build an oncology clinic in the eastern part of the Bay of Plenty in order to save local people and their families having to travel all the way to Hamilton on a daily or weekly basis for their cancer treatments.

“My first wife died from cancer in 1984, and I well remember the huge effort it took for both of us to travel up to Hamilton for her treatment,” Mr Hammond says. “So when I heard about the idea of building a local oncology clinic, I jumped at the chance. I got talking to other influential people in and around the area and we decided to raise the money to build a clinic here in Whakatane.”

Raising more than a million dollars isn’t a small feat, and the Project Hope committee set themselves the target of raising $1.1 million in just two years. Whakatane Hospital made available a disused children’s ward at the hospital that hadn’t seen action in more than a decade. They worked out they needed this amount to rebuild the ward to make it ready for the oncology clinic.

Thanks to the hard work of the committee, Eastern Bay Energy Trust (who contributed $250,000), the local media and others in the region, Project Hope achieved this target within the two years.

“Support from the community has been astounding,” Mr Hammond says. “Everyone got behind us.” Once the money had been raised, it was time to get on with building the clinic itself. Which is where registered master builder John Pullar came in. The Project Hope team had approached.

John for his opinions on the best way to project manage the building of the clinic, to which Mr Pullar replied by offering his services in this capacity — for free. “Helping out with the project management was something I felt I could really help them out with, and I wanted to contribute to this important cause in a real way,” he says.

But he didn’t simply leave his generosity at that. He thought about how he could help the project save money, and decided to approach other local registered master builders to see if they could all pitch in a bit and spread the generosity load around.

“I decided to round up the other builders, plus a range of our usual suppliers to see if everyone could help out a little. The idea was to spread the load around so that no one person was put out too much, but that it would all add up to a substantial amount of support for the project.”

And helping out is exactly what everyone did. Local suppliers, including Winstone Wallboards, PlaceMakers, Mitre 10, ITM and Bunnings all pitched in with reduced rates or free building supplies.

He also approached the many subcontractors required to see if they could help out in small ways as well, shaving even more off the costs of the building. “We weren’t asking anyone to do it for free, and many thought that my way of getting everyone involved made it more complicated than it needed to be. “But doing it this way meant that lots of people could contribute without having to get in too deep,” Mr Pullar says.

Thanks to the tireless efforts of these hard working registered master builders and their subcontractors, the building work was completed on time and slightly under budget. The clinic opened for treatment in early December last year, with the official opening taking place in February this year.

Mr Hammond explains that he’s been so impressed with the efforts of the builders that he’d never approach another building job without first using a registered master builder for the job. “These guys literally saved us hundreds of thousands of dollars. They worked hard, and the atmosphere on the building site was excellent. And, of course, the building work was done to a very high standard.”

High praise, indeed. But Mr Hammond saves his strongest endorsements for John Pullar. “I just can’t say enough about John. He and his wife Mary put in so much time and effort into Project Hope that we named our main treatment room after them. “This whole project has been an exercise in what can happen when local communities come together to do something good — and John is the epitome of that community spirit.”