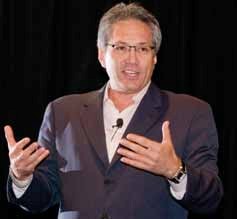 We have just had an absolutely fantastic conference in Wellington — great speakers, enjoyable social events, some interesting surprises and absolutely great weather. Go Wellington! As builders reading this will know, it’s great to step back from a day’s work on-site and know that the job has gone well. Well, for people like me, it’s great to step back from an event such as the Master Builders conference and know that the job’s gone well, too! It’s great when a plan comes together!

With more than 12 different business sessions/speakers, three great social events, a half day AGM, plus many other things to mention, it will be impossible to give full justice to the whole programme in this short piece. But, here are a few highlights for me: • The opening “political trifecta” — we opened the conference with a triple set of political speeches: one from the Minister for Building and Construction Shane Jones; one from Mai Chen, an expert political commentator; and one from the Leader of the Opposition, John Key.

The Minister gave some very useful announcements regarding decisions the Government had made around defining restricted building work (ie, what work was critical and needed to be done by a licensed building practitioner) and on the DIY exemption that would be allowed for (including the requirements for DIYers, and covering how builders would not be allowed to be classified as DIYers). We have been arguing for this position for some time, so it was great to hear that the Government had finally listened to the industry!

Mai gave some very humorous insights into the political process, which was well received by delegates. And John Key gave a broad overview of the National Party’s views on a range of matters which, again, delegates found informative, particularly at this point in the election process. • Celebrity speakers — we had superb morning presentations from Robyn Malcolm (actress – well known most recently for her role as Cheryl West in Outrageous Fortune) and Peter Montgomery (the sporting commentator who covers the Americas Cup, among other things).

John had a wicked sense of humour, but strongly brought home the theme of high performance thinking for business success. Paul was a bit more laid back, but gave a huge number of useful marketing insights gathered over years of running successful contracting businesses and working with building companies.

Delegates will have left the conference with some outstanding tools to build and grow their businesses. • Regulatory update — we had useful updates on licensing and other regulatory issues from Alan Bickers, Chairman of the Building Practitioners Board; and Nigel Bickle and David Kelly from the Department of Building and Housing.

Things are changing fast in the policy area, and it was great to get up-to-the-minute updates from these speakers. • Green building update — we had similarly useful updates on green building from Lynda Amitrano (BRANZ) and Philip Alviano (Victoria Master Builders). As newly elected RMBF president Brent Mettrick says, “if we’re not building green in the next few years we won’t be building at all”. And so it was very useful to get this update from Lynda and Phil. • Social events — and to top it all off, we had some great social events: two happy hours, the ITM welcome function on the first night; the PlaceMakers footy function on the second night; and the Carters gala dinner on the last night — three great events, which I know were enjoyed by all. The Mico Kid’s Club also rocked this year, and the DVD shown to delegates on the last day validated the great family event that the RMBF conference has now become. • Big surprise — we also awarded two life memberships at the conference, one to Graham Mallett, a past president and a tireless champion for Master Builders, and one to Ashley Hartley, who was standing down as president at this conference.

We were able to keep Ashley’s life membership award as a complete surprise, and I won’t forget in a hurry the look on his face when we sprung the award on him. A great RMBF moment! As well as the life membership award, we gave Ashley a greenstone mere — which in Maori tradition stands for strength and integrity, which Ashley demonstrated in spades over his two-year term as president and over the 30-plus years he has been involved with the RMBF.

All in all we had a great conference in Wellington, and thanks greatly to the Wellington Association for its superb help and support in hosting the event. We have now set our sights on conference 2009 — to be hosted jointly by the Blenheim/Nelson Associations. We have set some high performance bars for our conferences, but undoubtedly we will work to exceed them yet again next year.

See you in Blenheim next year!