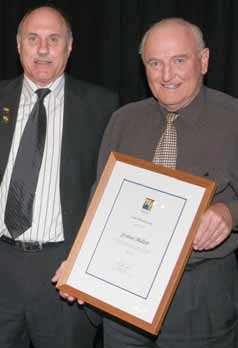 RMBF past president Graham Mallett has been awarded life membership of the Federation. Outgoing president Ashley Hartley presented Mr Mallett with the award, saying that every so often a person in our midst stands out year in year out over what sometimes seems to be a lifetime.

“We have such a person here, and I must say in my time in the RMBF this man has worked unselfishly for the benefit of the RMBF organisation and the wider membership,” Mr Hartley said.

In 1973, Foster Construction Ltd was formed as a partnership between Graham Foster and Mr Mallett, where he worked until his retirement in 1995 (plus or minus a year! Apparently, he kept going to the board meetings until last year! We reckon he was too scared to tell his wife Jocelyn he had quit!).

He joined the Waikato RMBA in 1970 and became president in 1987. He was respected as a past key commercial contractor in Waikato through his work with Foster Construction.

His other regional involvement has included being: • a key apprentice trainer, • a member of the commercial subcommittee,

• a past regional councillor representing Waikato and Bay of Plenty Master Builders and a member of the then National Council for 11 years, • a local House of the Year judge,

• a local Apprentice of the Year judge, • the current chairman of the Waikato/BOP Regional Advisory Group, and • a life member of the Waikato Association.

Although he is semi-retired and lives in the sunny Bay of Plenty, the Waikato Association says he continues to be an active member of the Waikato RMBA. He attends most of their meetings and joins in social events such as HOY, AOY, and the annual golf tournament.

He is, and has been, a pillar of the Association, and is held in high regard. At national level, Mr Mallett was elected Federation president in Hamilton in 1997.

He served on the National Apprenticeship Committee, was involved in the Carpenters and Labourers national wage negotiations for eight years, and was a member of regional and national advisory committees of the BCITO since inception, with a total involvement in industry training for 34 years.

He served six years on the BRANZ Board and later became its chairman. He was a House of the Year judge for around 15 years and an NZIOB judge for eight years. He represented the Federation on the Architects Education and Registration Board for seven years, and was a regular attendee at conferences, supported by Jocelyn.

Mr Mallett also attended his first International Federation of Asian & Pacific Contractors’ Associations (IFAWPCA) convention in 1998, and has attended all conventions since then, including many mid-year Board meetings held all over the Asia-Pacific region.