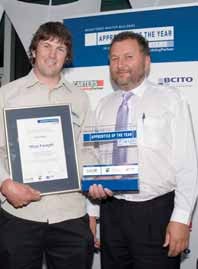 Entries have opened for the Registered Master Builders 2008 Apprentice of the Year, in association with Carters. Key players in New Zealand’s construction industry have again joined forces to find the country’s top young carpentry apprentice, as part of an ongoing commitment to recognise excellence in the industry’s future leaders.

Backed by principal sponsor Carters and supporting sponsors the Registered Master Builders Federation (RMBF), the Building and Construction Industry Training Organisation (BCITO) and the Department of Building and Housing (DBH), the competition celebrates the success of apprentices and raises awareness of career opportunities in the industry.

“The Apprentice of the Year competition is a great initiative that encourages young New Zealanders to succeed in the building and construction sector. I strongly encourage apprentices to enter.

”Now in its fifth year, the Apprentice of the Year competition underwent significant change in 2007, with the introduction of a national title. Last year’s competition attracted a record 133 entries.

Entry numbers are expected to grow even further this year, with the age limit being lifted to 26 years or younger in the year of the competition, to reflect the increasing average age of apprentices. Substantial prize pool Regional and national place-getters are being offered a substantial prize pool, including an attractive range of tools, Outward Bound leadership courses, study grants and the top national prize of a trip for two to an Australasian trade show, valued at $3500, plus a Carters Future Development Grant of $5000.

Chief executive of principal sponsor Carters, Stuart Munro, says the Apprentice of the Year competition is a fitting way for the company to recognise the valuable role carpentry apprentices have within the construction industry. “We were thrilled with the success of the inaugural national competition last year, and are pleased to be supporting this leading industry event once again,” Mr Munro says. Excellent way to test skills The winner of last year’s National Apprentice of the Year title, Rhys Forsyth, says the competition is an excellent way for carpentry apprentices to have their skills and knowledge tested against those of their peers.

“It’s rewarding to have your hard work recognised by your employer, family and friends, and leaders in the industry. “Entering the competition was a great way to challenge myself, and has opened up doors for my future in the industry,” Rhys says.

Entries in the competition are open until 31 July 2008. For further information, or to download an entry form, go to www.masterbuilder.org.nz or www.bcito.org.nz.

Entry forms can also be collected from Carters stores nationwide.