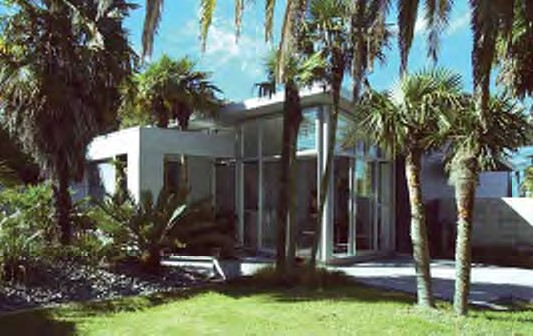 Radiating effortless style, this minimalist home in central Whakatane was the national award winner for New Homes $250,000 to $350,000 in the Registered Master Builders 2007 House of the Year, in association with PlaceMakers.

This striking home was built to suit the owner’s busy lifestyle, with function top of mind. The design is contemporary and features a mono pitch roof and large north-facing windows to allow all-day sun.

Bob Wheeler of Glencoe Construction says the company first caught wind of the project when it received an enquiry from a couple who had visited their company show home in Rotorua and were impressed with what they saw.

The home evolved considerably from the initial plans, with a number of challenges for the Glencoe Construction team to overcome. The plans had to work around an existing stand-alone garage which the client wanted to retain.

The site’s high water table posed some complex problems, meaning Glencoe had to drive piles under the concrete floor to counter this. The features in this house are numerous from the moment you step through the lacquered front door. Mr Wheeler noted that the interior colour scheme was meticulously planned and executed.

“The client had a very precise vision of what they wanted the interior to look like. They requested that the lacquered cupboard fronts exactly match the wall colouring — a process which required laboratory tests to ensure the hue was an exact replica.”

The white-on-white theme was complemented by the stack bonded concrete block entry wall and exposed concrete floors which run through all areas of the house. The spacious kitchen incorporates a large scullery, stainless steel and Caesar stone bench tops.

The house has an under-floor heating system using heat pumps as the power source, with a large gas feature fireplace in the lounge. Solar panels have been installed for water heating. The residence was finished brilliantly by beautiful landscaping, including a pond opposite the front entry and a fully landscaped courtyard.

Mr Wheeler says he started his career in building by working as a draftsman at an architect’s office. When he realised he needed something a bit more hands-on, he tried his hand at building. He soon found it satisfied his desire for more of an on-the-job challenge, and prompted him to start Glencoe Construction.

Thirty years later he still runs the company with the help of his wife, and has a staff of three foremen, carpenters, apprentices and alliances with local suppliers and tradespeople. “What I find the most enjoyable about what I do is taking the client from start to finish, designing, building and delivering a high quality home or alteration and addition project.”

Glencoe Construction has been entering the House of the Year since it began, and has had numerous local wins along the way. It has competed at a national level a number of times, but the Whakatane property was its first national award — an achievement Glencoe will aim for again in 2008, and in the years to come.