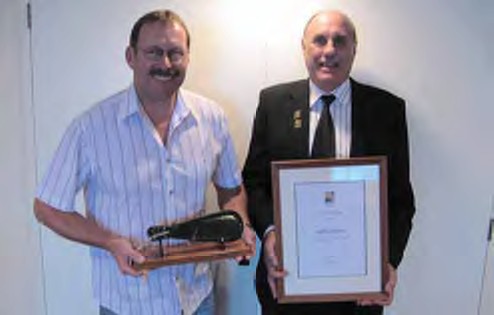 Registered Master Builders Federation immediate past president Ashley Hartley has been honoured with an RMBF National Life Membership. Mr Hartley was presented with the award by Minister of Building and Construction Shane Jones at the recent RMBF Conference in Wellington.

RMBF chairman Mike Fox described Mr Hartley as “an inspiration and leader to us all”, and that the industry was “so much better because of your tireless efforts and wisdom”. “Ash only has two speeds — on and off. When he is on it is 150% at whatever he does,” Mr Fox said.

Mr Fox acknowledged Mr Hartley’s wife Denise and employer, Gemco Construction. “I’ve been told that Ash is worth two employees so I can see massive productivity gains for Gemco this year,” he said, referring to the huge amount of time Mr Hartley had spent away from home and work in carrying out his industry duties.

Mr Fox said it would take too long to go into even a small part of Mr Hartley’s 42-year contribution to the industry. “But it is huge and, knowing Ash, it will continue for some time yet.” Mr Hartley began his career in the industry as an apprentice and building technician with Mackersey Construction Ltd in Hastings in 1966, before becoming head quantity surveyor, programmer and project manager with the company in 1970.

In 1999 he had a spell as manager of Lockwood & McMillan Group Ltd before becoming general manager of Gemco Construction Ltd, a Havelock North-based company which currently employs 50 staff, including 16 apprentices. The company also runs a division in Wellington which employs 12 staff.

Mr Hartley has won two New Zealand Institute of Building (NZIOB) Building Manager of the Year awards, and been project manager for millions of dollars worth of construction around the North Island.

Mr Hartley has always been an advocate of “you get from something what you put into it”. And it is clear that his contribution to the construction industry would be unmatched by anyone in New Zealand.

For the future, he says he will enjoy spending more quality time with his wife Denise. On behalf of all members and the industry, the RMBF thanks Ashley for his outstanding contribution.