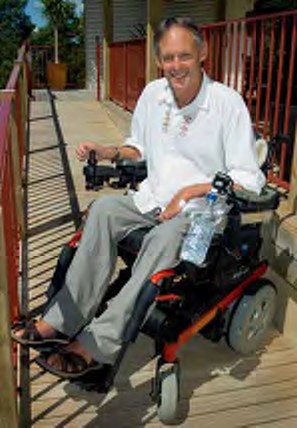 A former builder’s labourer who became a tetraplegic after falling from a building site is helping promote a Department of Labour scaffold safety campaign in Northland and Auckland.  Rhett Brown was a hammer-hand on a home construction site in Omaha in 2004 when he broke his neck after falling just 2.2 metres from a makeshift platform.

He spent six months in the Otara spinal unit and is now confined to a wheelchair, unable to sit up unsupported. His employers were prosecuted by the Department of Labour in 2006, and were found guilty of not taking reasonable steps to protect a worker.

Since his injury, Mr Brown has become a vocal supporter of improving safety in the construction industry, particularly when it comes to the use of scaffolds. He spoke about his experience at a scaffold safety education day run by the Department of Labour recently.

The education day was part of the Department’s Safe Scaffolding Practice Project, which is targeting residential and commercial construction sites in Northland and Auckland.  Mr Brown says he agreed to put a human face to the cost of construction industry falls because he didn’t want others to share his fate. “I’d like to think that after seeing me at the education day people went back to their own building sites and thought about the safety of their site and, if necessary, obtained some proper scaffolding.”

Builders and developers need to resist pressure to cut costs by cutting corners on safe scaffolding, he says. “They need to stamp out the ‘she’ll be right attitude’ towards safety that you see, particularly among smaller operators. Take it from me, things won’t be right.”

Department of Labour Manukau service manager Craig White says the Department has begun visiting construction sites as part of the project. Inspectors have provided information and, where relevant, have required that improvements be made to scaffold systems.

Mr White says the main problem found so far is scaffolding not being erected properly. “There is a real need in this country to improve the structural assembly of scaffolds. An incorrectly constructed scaffold is a dangerous and potentially fatal scaffold, it’s that simple. “We are looking at scaffolds that are already up on residential and commercial construction sites. This means we can work with the industry in a practical way.

“We’ll also involve scaffold importers if their systems do not meet New Zealand standards. We aim to raise the awareness of acceptable standards so users have the confidence and ability to reject any sub-standard systems,” Mr White says.

The Safe Scaffolding project is expected to run for at least another month or so, and also involves ACC, Site Safe, Tai Poutini Polytechnic and Scaffolding and Rigging New Zealand (SARNZ).