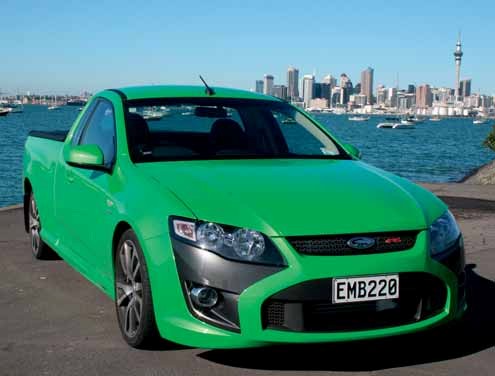 Travel back in time to 1934 to a Ford plant somewhere in Michigan and try to put yourself in the overalls of a technician at the time.

He’s been working with Father Henry’s formula for cars for quite some time, and has a pretty predictable working life.

Another Ford comes down the line and he fixes the tail light to the rear body work.

It’s a good job, he takes pride in his work and he’s accordingly very good at it.

Another Ford comes down the line.

He wonders about the future and where the car — as he knows it — will end up. He picks up a tail light and goes to put it on the rear body work, but then stops.

There is no rear body work! Well, to be more accurate, there’s no rear cabin. Our techie has encountered the first Ford Ute.

Here we are, 74 years later and we can tell our 1930s techie where the car — as he knew it — has ended up but, more importantly, for this article anyway, we can tell you where his ute has ended up.

It has become the mainstay of Ford’s Antipodean sales as Aussies and Kiwis alike have embraced the ute, and demanded more and more from it and its manufacturer.

An example of this demand is seen here in the new FPV-enhanced F6 Ute — the gateway to the pure performance ute range.

FPV stands for Ford Performance Vehicles, the “skunkworks” in Melbourne which “breathes” on Blue Oval product, delivering a Ford that is just a little bit special.

FPV is a well-established brand “at home across the ditch”, and while it has been here in New Zealand for a few years, it has only really come into its own with the FG Falcon launch which saw a complete FPV line-up for Aotearoa.

And that, in a long winded way, brings us to the F6 Ute.

It replaces what we knew as the Tornado, a sophisticated and spectacular foray into the world of turbo-charged, large displacement petrol engines.

Sadly, the Tornado is no more, the whimsical name plate replaced by a somewhat sterile designator.

This is actually in keeping with Ford’s idea of the intended buyer — someone who appreciates technical refinement in engineering, rather than the raw power appeal of an oversized V8 power plant.

Purists would say it’s not all about power — the F6 Ute stands proud on the other improvements FPV has integrated into it. Things such as the option of a six-speed manual or six-speed automatic with sequential Sports Shift for the same price, for instance.

Things such as the inclusion of Dynamic Stability Control to complement the ABS brakes with electronic brakeforce distribution, for instance.

And then there is the big highlight — that of styling. The addition of the “Alice Cooper eye patches” or “Kung Fu Panda eyes” for a more contemporary comparison, around the headlights, tells everyone that it’s an FPV approaching.

Closer inspection will reveal other distinguishing features such as the titanium mesh mid-grille and the opening of the lower air intake which reveals the inner workings of the intercooler.

The F6 is, whatever else one might think of it, a traffic stopper. This is not the sort of ute to drag up to the building site and dump 300kg of cement into the tray. Oh sure, the F6 will handle it but, well, you just wouldn’t. Not really.

In the cabin, the F6 includes the newly-upgraded Interior Command Centre screen, complete with the “walking man” who plonks himself down ready to drive — presumably after the engine has done all the checks it needs to do.

As to plonking yourself in the seat, you’ll encounter an intriguing fabric braced by suede bolsters and a push-the-button-to-start-the-car arrangement.

You can plug your iPoddy thingo into the centre console, plug your foot onto the throttle and you’re away like the proverbial small flying mouse-like marsupial exiting the Netherworld. Who said it wasn’t all about power?

So now you — the successful tradie who doesn’t want the baggage of a big V8 but still wants to make a bit of noise, visually and aurally — can avail yourself of the sophisticated showboat, the F6 Ute, at $63,990.